After witnessing the death of his brother Daiji, Shun quit wrestling. When Black Mist reappeared a year later to challenge fighters, he was reluctant to fight them. When his coach and friend Jo Kanzaki fights in his place and is about to be killed, Shun intervenes by becoming Azteckaiser. Azteckaiser has a mystical gem on the forehead of his mask called the Star of Aztec, which grants the wearer incredible power. 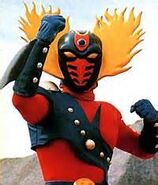 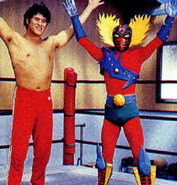 Bob Sapp vs Aztekaiser
Add a photo to this gallery
Retrieved from "https://ultra.fandom.com/wiki/Shun_Takaba?oldid=426714"
Community content is available under CC-BY-SA unless otherwise noted.