Return of Ultraman episode 12 "Revenge of the Monster Shugaron"

Shugaron was once a peaceful monster that lived in the Shirakami Mountains, however it greatly loathed the sounds of vehicles and after construction was done to allow traffic into the hills, the sound of vehicles disturbed the monster into becoming vicious and brutal. His wrath was first felt when he was awoken by a bike gang who were looking for trouble, especially where MAT was training, and the bike gang became victims of Shugaron’s wrath after chasing a girl.

Shugaron's wrath continued into the night by destroying the bridge that connected to the land to prevent the noise from entering his territory. Another thing that annoyed Shugaron was the amount of sulfur that coated the valley of where an artist and his family once lived. Now its only inhabitants were the deceased artist's daughter and Shugaron, which she felt was her father's spirit. MAT arrived by force through jets and attacked Shugaron as a threat. During the battle, Shugaron’s right eye was blown up, causing the monster to rampage wildly with no sense of control, wandering into the sulfur valley and destroying the painter's home, killing the girl as well.

Go then transformed in Ultraman Jack and the two began to battle one another. It seemed Shugaron had the upper hand, hitting Jack with his heat ray, but Jack managed to hold his own hurling Shugaron up into the air and back down. Finally Jack ran forward just as the monster was getting back up and after one swift blow to the gut, Shugaron fell forward dead. 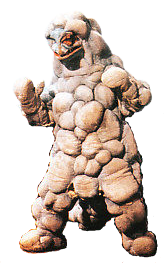 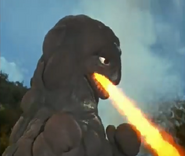 Shugaron's first appearance in the series was in episode 109 where he started fighting Redman alone and had the upper hand at the beginning thanks to his brute strength. Jirahs then showed up and helped the monster fight Redman. Even though both monsters gave him a hard time in the fight, the alien hero didn't give up and held his own against both monsters with his usual moveset and he finally defeated Shugaron by jumping up and giving him a hard Red Kick.

In episode 111, Shugaron teamed up with Gudon to take down Redman. Both monsters managed to gain the upper hand against the alien hero due to their great teamwork and even though Redman managed to hold his own against them, both monsters had the winning edge on him. However, both monsters were defeated by Redman's newly debuted Red Shot.

Shugaron reappeared in episode 112 where he teamed up with Gudon and Sadola to fight Redman in a field. All three monsters knocked away the alien hero's Red Knives when he threw them at them and then engaged him in an evenly matched fight with the usual grapples, throws, chops, punches, and kicks. Despite having the team advantage against him, Redman didn't give up and after he defeated Gudon, Redman defeated Shugaron with a hard double kick to the neck and Sadola soon followed afterwards.

In episode 116, Shugaron had the upper hand against Redman in a grassy field and he was soon joined by Sadola. Both monsters had the advantage over the alien hero due to their combined brute force and strategic know how in teamwork, but nonetheless, Redman didn't lose hope and he managed to hold his own against the two monsters with his usual brutal moveset and then, after he defeated Sadola, the alien hero defeated Shugaron by using his Red Fall technique.

Shugaron reappeared in episode 119 where he teamed up with not only Sadola and Gudon once more, but also with Alien Icarus and Zagoras to take on Redman. All five of them avoided getting killed by the alien hero's Red Knife twice by crossing their arms simultaneously. Redman tried to take on the monsters one at a time with his usual moveset of throws, grapples, punches and chops, but he was overpowered by their sheer ferocity and well-rounded teamwork. However, Redman didn't give up and kept up his assault until eventually, he defeated all five of them by throwing his Red Knife in the center of the circle of monsters, resulting in them getting knocked down and out by the explosion.

In episode 137, his final appearance on the show where he teleported behind Redman and challenged him to one last fight after the latter defeated Gudon. However, unlike Gudon, who managed to put up a good fight, Shugaron was completely at the mercy of the brutal alien hero now matter how hard he tried to fight back. In the end, Shugaron was defeated one last time by Redman's Red Thunder, leaving lying down on the ground for dead. 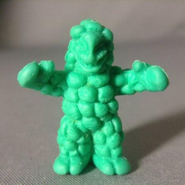 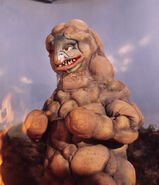 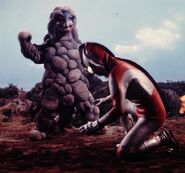 Shugaron with a missing eye 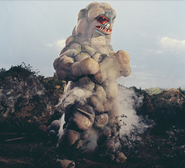 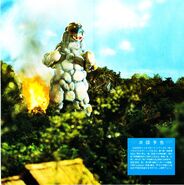 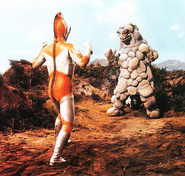 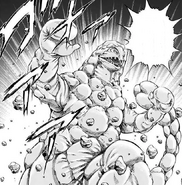