"I must protect, all forms of life. That is my mission as an Ultraman!"

―Sho declaring himself as an Ultraman to Juda Spector, Ultra Fight Victory

Kiyotaka Uji
Sho (ショウ Shou) is the prince of the Victorian civilization and the host of Ultraman Victory. He is also one of the main characters is Ultraman Ginga S and the protagonist of Ultra Fight Victory.

Sho initially distrustful towards people from the surface world, particularly Hikaru whom he immediately engaged in battle as Ultraman Victory upon learning his nature as the host of Ultraman Ginga in their first meeting. Despite this, he gradually learned to trust his new allies upon learning that they have common enemies, though the said trust later put into the test upon learning that one of higher ups from UPG has secretly developed Victorium Cannon. Nevertheless, he eventually reconciled with Hikaru and UPG after learning the whole truth.

Upon reaching the surface, he met Hikaru Raido briefly before Android One Zero interfere and Monslived into EX Red King and fought both Shepherdon and Sho as Ultraman Victory. Both were overpowered until the returning appearance of Ultraman Ginga defeated the monster. Despite Ginga finally terminated EX Red King, but Sho/Victory quickly stole the Spark Doll and Ultlance with it to use its power as he began to fight Ginga. Before the two Ultras about to clash with each other, Queen Kisara quickly cancelled their transformation.

The next day, when a Victorium Crystal about to be stolen again, Sho rushed to the city and found One Zero where he briefly fought the android before she ran away. UPG members split as Gouki and Hikaru confront Sho while Alisa chased One Zero. Sho managed to overpower Gouki despite the man having a black belt in karate and confronted Hikaru. However, Hikaru still tried to gain his friendship to the point where he saved Sho from a falling debris and saving him from a Monslived Eleking while in their Ultra forms. Sho finally accepted their friendship as Hikaru gave him another chocolate bar.

While in the human world, Sho would always stopped his own step-siblings Repi and Sakuya when they were out to the human world for playing, fearing their safety and sees humans as seeing humans as nuisances despite his mother's request to befriended them. Due to this, he also hesitates in his battle as Ultraman Victory. However after seeing the errors of his ways, Sho developed a change of heart and even allowed his step-siblings to play at the outside.

Near the end of the series' first half, he went to the UPG's base after Shepherdon had his energies stolen by Alien Guts Vorst/Gan-Q. Sho transforms into Victory as well as Hikaru to protect Shepherdon from the alien/monster. The Ultras managed to defeat Vorst and his Monslived Kaiju. After resting, the two Ultras tried to escort Shepherdon when suddenly Five King emerged from the sky and killed Ultraman Ginga and Victory. Sho and Hikaru however survived as he introduced himself to the UPG members for the first time. When Android One Zero tried to destroy the base on her own, Sho fought her and destroyed the bomb in her chest that she was seemingly truly defeated. After being revived by the UPG members, both of the Ultras' human hosts transformed and fought Five King in round two. Sho/Victory distracted the chimera monster with his Victorium Slash so that Hikaru/Ginga to get close to destroy his Victorium crystals with his Ginga Spark Lance, reducing Five King's power. Victory uses the same plan while Ginga Strium injured Five King. As the monster tried to escape, both of them attacked its wings, leaving unable Exceller to retreat. Ginga then put an end to Five King by using Ultraman Taro's Strium Beam, causing the monster to explode. With the battle over, the Ultras flew toward the morning sunrise.

In the second half of the series, his trust for humanity diminished after learning of the Victorium Cannon, believing Hikaru had betrayed their friendship until he learned the truth, as well as the rise of Vict Lugiel. Despite the Ultramen's petrification, they manage to regain their strength and finally defeating the tyrant again when One Zero, now Mana sacrificed herself.

Later, Sho and Sakuya had joined UPG. At some point the two were attacked by the Choju Aribunta, who was attempting to steal the Victorium Stone. Sho transformed into Ultraman Victory to fight it with his UITrans but the arrival of Yapool threw him off his game and was eventually weakened by the choju's attacks. However, Ultraman Hikari appeared and weakened the fiend so that Victory could finish Aribunta off with the new Knight Timbre Hikari invented. Sho was then given the task to help seal the Space Emperor for good.

Sho, as Victory, went to Satellite Golgotha to save both Ginga and Ace from Ace Killer, now called Victory Killer. While Victory was evenly matched against Victory Killer's copied Ultlance powers, Lunaticks, was summoned by Yapool to kill Ginga. To Sho's surprise, Shepherdon's Spark Doll called out to him, and using Victory Knight's power, he restored the sacred beast from Doll form, to battle Lunatyx while he fought Victory-Killer. The two Choju were eventually defeated, and after restoring Ginga and Ace's Energy, Sheperdon returned to Sho as a Spark Doll. The trio of Ultras were later alerted by Yapool, that the revival of the Emperor was soon at hand.

They then landed on Planet Gua and helped Leo and Astra defeat Vakishim, Doragory, Verokron, and Yapool once and for all by using the Ultra Fusion Brace to Ultra Touch and fuse into Ultraman Ginga Victory. Unfortunately, upon Yapool's defeat, the energies left by him were used to finish the Space Emperor, Juda Spector's revival. He then summoned Super Grand King Spectre to fight the Ultras. After Ginga Victory was separated thanks to the robot's attack, Sho suggested that he would take the fight to Juda Spector himself while the others deal with the modified Grand King. Despite Juda initially holding the advantage, Sho refused to give up and, with help from the Shepherdon Saber, managed to turn the Victorium energy within the distortion against the Spector duo, allowing the Ultras to finish them off once and for all.

Following the Space Emperor's defeat, Sho used the Knight Timbre to return the Victorium Core's energies back to Earth and tried to return the device to Hikari. However, Hikari insisted that he keep it and left Earth's protection in the hands of both Victory and Ginga.

Sho reappears, along with Ultraman Victory, in episodes 13 and 14 of this series.

He is first seen transformed as Victory, and fighting a revived Mold Spectre. Gina Spectre called her brother to Ultraman X's universe to devise a plan to conquer that universe. Mold suddenly snatches Victory, for his own amusement, and heads towards his sister through a portal. Upon arrival to Ultraman X's universe, Mold places a mouth guard on Sho to keep him quiet. Sho's Victory Lancer was also missing, as it was with Arisa, who was accidentally sucked into the portal.

Later, Sho is seen kept as a prisoner, guarded by an Alien Shaplay and Alien Magma. While the two aliens were bragging about their acceptance into the Gua Army, Sho quickly slipped free and knocked out the two aliens. He later runs into Daichi Oozora who was on scene to search for him. Daichi misinterpreted Sho as unknowledgeable to human languages and began speaking to him in broken Japanese. X noticed the mouth guard and began analyzing it, finding out that the mouth guard was made with an extraterrestrial substance.

In the Xio base, Dr. Gourman removes the mouth guard, and Sho began a strict training towards Daichi in swordsmanship. After a long and harsh training session, Sho and Daichi transformed into their respective Ultras to once again battle Mold and Alien Magma. Hikaru (as Ultraman Ginga) also arrives, after destroying the Gua Army. The three Ultras finishes off Mold and closes the dimensional portal to avoid more Gua Army members from invading.

In episode 14, Sho is reunited with Hikaru. The three Ultra Hosts discuss about their bonds with kaiju, but was soon interrupted by the attack of Mecha Gomora. Sho and Hikaru were just about to transform, but was interrupted by Alien Shaplay and Gina. During the battle, Sho fired a King Joe bullet from the Victory Lance, forcing the Alien Shaplay's to take the bullet, ensuring Gina's safety. Arisa and Asuna then finished off Mecha Gomora with a combination attack with the Ultlaser and Cyber Gomora.

Swearing vengeance, Gina, Mold, and the spirit of Juda fused to create Gua Spectre and the three Ultras appeared again to combat the new threat. After a long and tough battle the Ultras defeated Gua and reverted back to their human hosts. Sho and Hikaru bidded everyone goodbye, and Sho encouraged Daichi to continue on his goal to allow humans and Kaiju to coexist. The latter then headed for their universe through Ultraman X's dimensional portal.

After sealing Grimdo, the New Generation Heroes lost their ability to transform, and went to Taiga's Earth to protect Hiroyuki Kudo. Sho and Hikaru first appeared to help Homare Soya fight off against Kirisaki, but failed to stop him. Soon, Grimdo landed on Earth, and fought against Ultraman Rosso, Ultraman Blu and Ultraman Taiga. However, they were no match for the beast and were about to be defeated until Ultraman Taro arrived to rescue his son. Soon, Taro fell for Tregear's trap and was possessed by Grimdo after executing the Ultra Dynamite on it. Now under the monster's control, Taro assaulted the three Ultras and forced them to revert. Hikaru and Sho explained the situation to Hiroyuki and had their transformation devices restored through the Bracelet Accessories before moving on.

After Katsumi Minato, Isami Minato and Hiroyuki confronted Kirisaki, the New Generation Heroes transformed to fight against Tregear, Taro, and a monster army revived from their Rings. They power-up to their strongest forms in response to Grimdo granting the monsters some of its power, and manage to defeat their opponents. Afterwards, Tregear offered himself to Grimdo, who had been released from Taro's body. This caused Grimdo to swallow him and grow to giant size, and regain its full power. The New Generation Heroes consecutively use their finishers against Grimdo, but to no effect. Just was they were about to be blasted by Grimdo, Taro protected the New Generation Heroes with a barrier and told them to pour their energy into Taiga's Ultra Horns. Upon doing so, Hiroyuki received the New Generation Eye and transformed into Ultraman Reiga, and defeated Grimdo.

With the battle over, the New Generation Heroes gave some parting words to Hiroyuki before leaving for their home worlds. Ultraman Taiga The Movie: New Generation Climax

By turning the Victory Lancer into Lancer Mode, Victory's Spark Doll will appear and Sho will place it on the item's transformation spot, causing the face to appear and a voice to declare "Ultlive: Ultraman Victory". Sho's body will then light up and Victory's glowing form is seen flying away, Sho follows as light, merging with his Color Timer and completing the Ultra, from there a normal Rise Scene is shown with crystal and a red background.

Both Hikaru and Sho transform via the Ultra Touch (ウルトラタッチ Urutora Tatchi) by performing acrobatic jump and uniting the Ultra Fusion Brace and the Victory Lancer. Once doing so, the apparitions of Ultraman Ginga and Victory appear and combine, with the next scene shifts to the rising sequence of Ultraman Ginga Victory.

Hikaru and Sho declaring the fusion

Both somersault towards each other

Hikaru and Sho reaching out

Like Hikaru, Sho also had his own set of Spark Dolls which he acquired after defeating a Monslived kaiju. 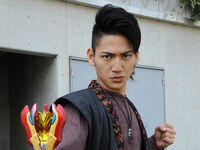 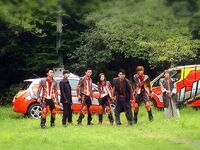 Sho and Kamushin with UPG members

Sho and Hikaru within Ultraman Ginga Victory in the movie