None
Shiyu (蚩尤 Shiyū) is a member of Japanese mirror demons in Mirrorman REFLEX. He is based of Iron from the original Mirrorman.

A demon from the mirror world, Shiyu managed to escape into the world of man. He began to torment researcher Akami Hiro before Akira Kageyama and Momoso arrived. With the aid of Momoso, Kageyama transformed into Mirrorman and grew to a gigantic size. The green and silver giant attacked Shiyu, but the demon merely shrugged off the attacks. Shiyu fired an energy bolt attack at the Mirrorman, but through the smoke and fire, the hero emerged his gigantic sword. Mirrorman then cut of Shiyu's arm, the arm fell to the ground and turned into blue fire, but soon a new arm grew forth and launched out attached to a chain. Mirrorman freed himself of the chains and again charged the demon. With another swipe of his blade, the giant cut off Shiyu's own face. The demon fell to the ground, its entire body burning into blue flames. Shiyu later returned briefly, but Mirrorman was again able to vanquish him. 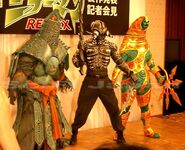