Shishigoran was a Terrible-Monster that possessed a young boy, Shinda, with a cursed lion mask. He was summoned with a lion song made by the possesed Shinda's dad. He began rampaging through the city, stepping on buildings and causing explosions with his eye flashes when suddenly, the Terrible-Monster Kaimanda awoke! The duo went about wreaking havoc. Ultraman Ace soon arrived and attacked Kaimanda, but he was ambushed by Shishigoran. Ace managed to destroy Kaimanda with the knuckle beam, but then he found Shinda in the monster's so it became though to fight off Shishigoran, who beat him down without mercy until Ace's Color Timer was blinking dangerously fast. Ace then summoned all of his remaining strength and attacked Shishigoran with ease. Ace used the Metalium Beam, striking Shishigoran in the forehead, killing him once and for all. 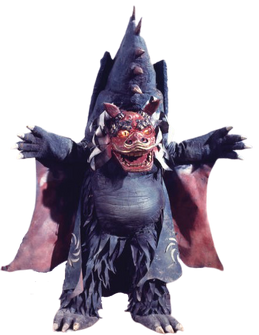 A figure of Shishigoran, created by Marmit. 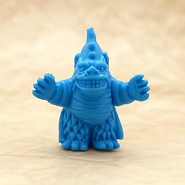