Rihito Noda
Shinya Kaburagi ( Kaburagi Shin'ya)[1] is a character in Ultraman Z. He is a researcher of GAFJ's Monster Research Center's Biochemistry Research Division (生化学研究部所属 Seikagaku Kenkyū-bu Shozoku)[2][3], where he ended up being possessed by Celebro as the alien's initial means to operate on Earth.

Shinya was originally one of the few workers of Monster Research Center under GAFJ's supervision. In the night after he and his teammates cleaning up Genegarg's remains, Shinya accidentally tripped his delivery canister. He was possessed by Celebro in the middle of cleaning up his mess and once the parasite winning over his host, the possessed man picked up the stolen Z Riser and an orange splinter-like object. Chant My Name!

Under Kaburagi's identity, Celebro studied the Z Riser technology and created Kaiju Medals for his own transformations and empowerment of monsters. During this time, he had several run-ins with Jugglus Juggler. However, his actions alerted the GAFJ department into issuing an arrest warrant at the time of Metsuboros's death. By the time he was on the run from authorities, Kaburagi's body started to take its toll and this forced Celebro to possess the GAFJ captain Asano. Kaburagi awakened for the first time in a while, but he was arrested and scapegoated for all of the atrocities done by Celebro during his possession. Beliarok

Under unknown circumstances, Kaburagi was released from custody at some point before or after Celebro stole Ultroid Zero to enact his Civilization Self-Destruction Game. He appeared after the final battle, assisting Yuka in capturing Celebro (who had managed to survive the destruction of Destrudos) just before Juggler could harm him, with full intention on helping the enthusiastic scientist in dissecting the parasite. Rather than meet his end in battle, Celebro now faced an even more ironic fate, in that he was to be taken apart for study by the very first person he attempted to control. Warriors Shining Beyond.

Like Haruki, Riku, and Juggler, Shinya sets his Ultra Access Card into the Z Riser and then places three Kaiju Medals in the slots before sliding the blade and pressing on the trigger. 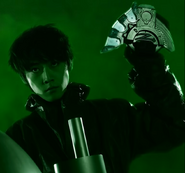 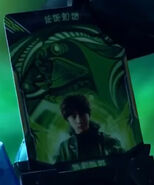