Ultraman Gaia episode 46 "The Attack of the Forest"

None
Shinryoku (, Shinryokulit. "Depth Green") is the final Nature Control Machine in the series Ultraman Gaia in episode 46. Shinryoku's purpose was to replant the Earth's forests, the final step to repopulate the Earth.

As Catherine Ryan of Alchemy Stars found out, Shinryoku was built using human technology, with its inner workings being a carbon copy of the energy plant Ent that she proposed on Canada. This was later confirmed by Yabuki Shirogai, who stated that Shinryoku was created by mankind from the future after they submitted to the Radical Destruction Bringer.

Being the last of the nature machines along with Tenkai and Enzan. It appeared out of the ground and within minutes turned the city into a giant forest. XIG volunteered Catherine Ryan of their Canadian branch, Gamu Takayama, and Team Hercules to go in and investigate the inner workings of Shinryoku. Shortly after entering the robot, Team Hercules open fire at Shinryoku's defense systems, giving Gamu and Catherine the cover they need to find the machine main power source. They quickly located their target but they also encounter a woman, named Yabuki Shiorigai, who previously appeared as a promoter of the Root of Destruction.

Yabuki was in control Shinryoku or a manifestation, she explained to XIG that she had brought all three of the nature machines from the future at the beckoning of the Radical Destruction Bringer itself, and that its was mission to purify the Earth of the human race. However, Catherine fired upon Shinryoku's Main Circuit slowing down the robot, and allowing Gamu to transform into Ultraman Gaia, and the fight begins. Team Hercules and Team Lighting join in to try and keep it at bay. Soon Gaia finishes it off with the Photon Edge, causing it to spark and soon explode, making the forest to disappear and marking the end of the Natural Control Machines. The Attack of the Forest 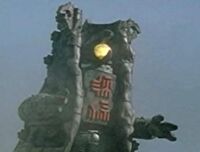 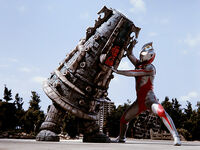 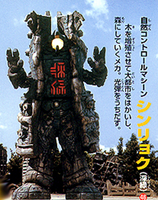