"I will give Ninja Monster Shinobilar another chance. This time I will attach Shinobilar a powerful weapon."

Shinobilar was known as Skorn in Superhuman Samurai Syber-Squad, the American adaptation of Gridman.

A ninja virus with ability to speak; in his first appearance, Shinobilar can shoot sparks, carried two katanas, and create multiple illusion clones of himself. His mission was to brainwash the students and faculty at Takeshi Todo's cram school. Some of the students were classmates with Naoto Sho and the gang, when Ippei Baba and Yuka Inoue noticed their aggressive behavior, they went to the cram school only to chased away by the enslaved students. Shinobilar had Gridman at his mercy with his clone technique; but Gridman was able to claim victory by hurling the Thunder Axe at the real Shinobilar.

Shinobilar's data was reformed and was given a kusarigama. This time, Takeshi was playing a virtual shooting game, but was taking too long that the arcade staff forced him off. Angered, Takeshi used Shinobilar to infect the game. The headset took over the player's mind and turned the virtual gun into a real laser gun. Yuka was the unfortunate player; under Shinobilar's control, she went around town shooting everything in sight. The battle seem too easy for Gridman at first, but Shinobilar revealed his ability to make himself incorporeal; all Gridman's attacks passed right through the ninja. After Twin Drill broke Shinobilar's weapon, Thunder Gridman was formed and performed the Thunder Grid Beam.

Shinobilar's data was once again revived, now, armed with a nunchaku, he fought purely with his fist and feet, until Gridman destroyed him with his King Grid Beam. 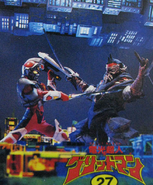 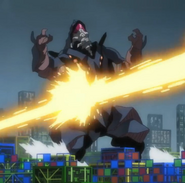