"Humankind has over-evolved! That itself is leading the universe to destruction"

Ultraman Gaia episode 48 "The Revenge of the Death God"
Shinigami (死神, Shinigamilit. Death God) was an alien that appeared in the series Ultraman Gaia. He is the messenger of the Radical Destruction Bringer. His true form is Zebub (ゼブブ Zebubu).

As the messenger of the Radical Destruction Bringer he was sent to conquer Earth with the massive Kaiju Mokian, while also trying to force Hiroya Fujimiya to fight for the Radical Destruction Bringer, he takes Reiko Yoshi hostage. Shinigami then tells Hiroya about Reiko, causing him to go to look for her at her apartment, but instead is lead into the M91 space. He finds her and he shows himself to them and tells him of there plans of destruction and conquest and even tells him the fate of X.I.G and how he sent Mokain. Later Mokian is destroyed and so the death god leaves and as the area they stand blows up Hiroya turns into Ultraman Agul and follows him back but, only to show his true self.

On Earth Shinigami turns into his true form of Zebub and the blue giant and him fight but, it takes a turn for the worse when Zebub cuts Agul's hip open with his blade. Fortunately Ultraman Gaia arrives and heals Agul, who turns back to Fujimiya. The fight begins and Zebub launches attacks at him and the fighters find out about his weak spot, the horns, and blows them up and thinking he was weakened attack him full force but, only to be deflected by a energy barrier and the battle ensued and one of the leader fighters attacks him and blows up his spear and one of his eye's, enraged he takes down the fighter jet. With enough time he transform into Supreme Version and uses the Photon Stream to destroy him. With the death god dead the final phase of plans begins. 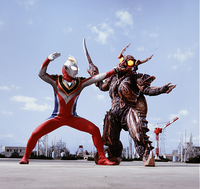