"I wanted to be with you guys. I want to fight together with Ultraman alongside all of you."

Minoru Tanaka
Shingo Sakomizu (サコミズ・シンゴ Sakomizu Shingo) is the second captain of GUYS. In the last episode of Ultraman Mebius, he was chosen by Zoffy as his temporary human host.

He is a kind man and not too serious. He is known for his love of coffee and its different flavors.

Back during the time of the SSSP, Sakomizu was assigned to the Izanami, for test flights into sublight speed technology. During one of these flights he was attacked by a fleet of alien ships but saved by Zoffy. This incident made him realized what the Ultras were actually doing for humanity, that the human race was unaware of and his testimonies upon his return were the reason GUYS was formed and maintained despite a lack of supposed threats from aliens or monsters for twenty five years.

Due to the Rip Van Winkle effect, Sakomizu had only experienced a fraction of the time experience on Earth. The result of approaching the speed of light is that time stretches and the time inside the object slows down compared to the outside.

When Mirai first came to Earth and visited captain Ban, the distraught old man called Sakomizu who escorted Mirai, becoming the only one of the team who knew his secret until the Inpelaizer first attacked.

In episode 47, when the Emperor began the first waves of attack on Earth, he revealed the truth to all of crew GUYS, that actually he was the Inspector General of GUYS Japan. Only Misaki knew that Sakomizu had concealed his position all this time to be in the front lines.

During the crisis of Alien Empera, he became a temporary host for Zoffy, fighting beside crew GUYS, who had merged into Mebius Phoenix Brave. After the final battle was over, he returned to his position as Inspector General and left the position of captain to Ryu. 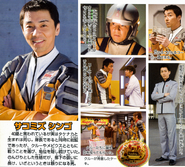