"Have you become so fond of humans, Ultraman?"

The movie was first set to be released in early summer 2021[1], but was delayed due to concerns over the COVID-19 outbreak, with no new date being announced as yet.[4]

The movie will be written and produced by Hideaki Anno, who is most well known for his work on the Evangelion franchise and more recently, Shin Godzilla. Anno will be fully attached to the project after completing his work on Evangelion 3.0+1.0. Anno's long time partner and colleague Shinji Higuchi, who also directed Shin Godzilla, will be the movie's director.[5]

The first draft of the script was reportedly completed on Feburary 5th, 2019.[5]

Additional cast members including Daiki Arioka, Akari Hayami, and Tetsuji Tanaka were later announced to have been added to the cast of the movie.[7][8]

On November 23, 2019, Director Shinji Higuchi announced at the 2nd Atami Kaiju Film Festival that filming for the movie has already been completed.[9]

Ultraman's new design and the movie's title card were revealed at Tsuburaya Convention 2019.[10] Being based on Tohl Narita's painting Incarnation of Truth, Justice, and Beauty, the design noticeably lacks the Color Timer, and is also missing the "dorsal fin" on the back which would normally be used to conceal the zipper the suit actor uses to enter the suit. The black dots on the eyes, which are the suit's eye holes, are also absent from the redesign.

On November 3, 2020, a 2-meter tall statue of Ultraman was unveiled at the opening ceremony of the Sukagawa Tokusatsu Archive center in Fukushima, which was Eiji Tsuburaya's hometown. Hideaki Anno, Shinji Higuchi and Katsuro Onoue were present for the event. They also announced the release date to be in early summer, 2021.[1] 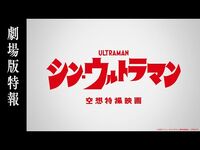 Retrieved from "https://ultra.fandom.com/wiki/Shin_Ultraman?oldid=532550"
Community content is available under CC-BY-SA unless otherwise noted.