"You're a lucky man, Hayata. A very lucky man."
"Nobody knows that better than I."

Susumu Kurobe
Shin Hayata ( Hayata Shin) was a senior member of the Science Special Search Party, or SSSP (called the Science Patrol in the English-language dub for United States audiences) for short, who was involved in a crash at Ryumagori that bonded him with the first Ultra Warrior to become a hero to the people of the planet Earth--the native of Nebula M78 called Ultraman. Hayata later left the SSSP after it was disbanded and replaced by the Ultra Guard, or UG; later, he was a mentor of Ultraman Mebius' human form, Mirai Hibino.

After the official landing of a blue sphere at Lake Ryugamori, SSSP member Shin Hayata was dispatched to investigate it in the small Sub VTOL. However, as he was approaching the lake, his VTOL collided with a red "Travel Sphere," the space ship of the giant of light, Ultraman. After the crash, Hayata was mortally wounded, but Ultraman, ashamed of having accidentally killed such a good-hearted, peaceable man, decided to bond their lives together, and merge their bodies, to protect Earth. The crash was witnessed by a few campers, who had also seen unusual blue flashes in the lake. These campers contacted the SSSP. The crew arrived too late to do more than witness all that remained of Hayata's ship being consumed in the flames. But the following morning, they suddenly received a radio call from their seemingly dead companion, requesting the Special Submarine S16. Hayata approached the craft, then used it to descend it to the bottom of the lake to find the monster Bemular, a captive of the Monster Graveyard who had escaped while Ultraman was guarding the area.

Hayata successfully drove Bemular out of the lake, but he himself was caught in the menace's jaws, in which Bemular seized the sub before emerging onto land. After Bemular threw the submarine to the ground, Hayata was knocked unconscious and the SSSP began to attack the monster with missiles. Soon, Hayata regained consciousness and, noticing blood trailing from his forehead, unlocked the sub's hatch and, igniting the "Beta Capsule" for the first time, quickly transformed into Ultraman before the sub was destroyed by Bemular. The alien monster began to assault the beast. Due to the fact that Ultraman had a better reach than Bemular, Bemular retreated into his own blue Travel Sphere, which Ultraman destroyed using his Spacium Beam. Just before the trip home, Hayata suddenly reappeared in the midst of his teammates and explained about the hero, Ultraman. However, Hayata never told anyone that he himself had become Ultraman's human host.

Hayata's final role in 1966 was a showdown between his Ultra, the original Ultraman, and Zetton. However, the SSSP base was first ransacked and almost destroyed by an agent of the Alien Zetton race, who used his shape shifting abilities to fool the members and destroy the SSSP's powerful super-computer. When the last of these aliens were killed, he activated a command in which summoned their last UFO and unleashed the massively powerful Zetton. Hayata transformed and Ultraman appeared for his final fight, but was agonizingly defeated by falling victim to a weapon, which damaged his warning light and left him incapable of gauging how much energy he had left, and whose use by the Zetton Leader he had not expected. Finally, it was up to the SSSP, who dealt with the menace and defeated it using Dr. Iwamoto's Zero Gravity Bullet, which SSSP member Daisuke Arashi fired at Zetton. Soon, Zoffy came and rescued Ultraman by separating him from Hayata, who immediately lost all the memories that followed his crash at Lake Ryugamori. Hayata later left the SSSP when it was replaced by the Ultra Garrison. He presumably later came into contact with Ultraman once again and merged with him.

Shin Hayata appears in episode 38 of this series. After Ultraman Jack has been taken prisoner by Alien Nackle's ships, Shin Hayata and Dan Moroboshi (Ultraseven's human form) journeyed into space to rescue him in their Ultra forms by destroying Nackle's ships. After landing on Planet Nackle, Jack salutes his comrades for their help and returns to Earth to deal with Nackle and Black King. When the Ultra Star Shines

Shin Hayata seems to have fused with Ultraman again as shown in Return of Ultraman. When Taro, as Kotaro Higashi invited his comrades to Earth for a party, he and his comrades arrive and they have a feast in the form of shish kebab. 5 Seconds Before the Great Explosion of the Land of Ultra! The Last Day of the Six Ultra Brothers!

After Ultraman lost his abilities sealing Yapool away in the ocean of Kobe 20 years ago, he merged with his partner and shown to work as an airport administrator in Kobe's airport. After Mebius' battle against Alien Temperor, Shin Hayata reveals himself to Mirai Hibino, and after a short conversation, Hayata, along with Dan Moroboshi, Hideki Go, and Seiji Hokuto, had a conversation about what it means to be an Ultraman, why they stopped being one, and they told Mirai the history of their final battle against Yapool, who they could not destroy and they had to seal him in the sea close to Kobe with the Final Cross Shield, which costed them almost all their energy and made them unable to transform, and why they decided to live in Kobe. A while later, Hayata and his other brethren were looking at Mebius' battle against Alien Zarab, and they saw when Mebius was defeated and crucified by Alien Guts, which gave them no choice but to transform again into their Ultraman forms to save him.﻿ But in their Ultra forms they didn't have enough energy to properly fight so they were soon defeated as well.

They soon became crucified and although Mebius found new strength after being encouraged by a young boy he befriended earlier as Mirai Hibino and managed to save his brethren he was unable to stop the U-Killersaurus Neo along with Yapool from becoming free from the Final Cross Shield. As things were looking bleak for our heroes and the Ultra Brothers knocking on death's door the fight seemed over for them. However, two lights emerged from the darkness of the sky, and Zoffy along with Ultraman Taro appear, descending from the sky. They gave enough energy to fully charge our heros and although unable to defeat their enemies alone they managed to defeat U-Killersaurus Neo and Yapool by combining themselves into Mebius Infinity therefore having enough power to easily overpower the two fiends. With the barrier broken and Ultraman no longer needing to give energy to maintain and Hayata was once again able to transform into his respective Ultra without the fear of dying. Ultraman Mebius & the Ultra Brothers

Hayata showed himself again with the rest of the Ultra Brothers, acting as teachers and aids for Ultraman Mebius. He appeared in episode 47, during Mefilas's game, he was the only human seen not affected by the mental wave, which is odd considering he was affected by the Underground People's brainwashing. He appeared to help defeat Alien Mefilas, transforming into Ultraman to send the alien into retreat. He later returned again in the final episode when the Ultra Brothers were communicating with Crew GUYS.

An alternate reality verson of Shin Hayata reappeared in the movie as a bike merchant. In this universe Shin did not know he was Ultraman or at least remember if the dialogue with his wife meant anything. As Mirai tried to make him remember who he is and reawaken the seven heroes. However, it was ultimately Daigo and the elder Ultra Brothers' wives who reminded them. At the end of the film Shin and his wife is seen last flying into the space in the Jet VTOL along with the rest of the Ultras and their families to what is speculated to be Nebula M78.

It is heavily implied that the Ultra Brothers in this movie were aliens that inspired the TV series and that they had forgotten their past having lived on Earth so long. This would mean that Hayata and Ultraman were one and the same and that their daughter Rena was part Ultra.

Shin Hayata and Dan save Mirai and Rei from Alien Shaplay and his monsters. The four made their way to the Ultra Tower where the last of the Plasma Spark's light was protected by Taro. After a short bout that finished off Alien Shaplay, the three Ultras regained their Ultra forms and take with Rei to face Belial.

While Shin's image appears, it was simply as a mouthpiece for Ultraman. In the Land of Light he met Seven, Jack, Leo, and Ace in their human forms and discuss the apparent threat they detected but could not identify and question how Zero was doing.

Originally the five Ultra Brothers were intended to fly to the Future Earth World after Alien Bat sent out an army of revived monsters using the Spheres to recreate their bodies. Ultraman would have had a rematch with his old enemy, Antlar. Surprisingly, even though whether it was because Ultraman became stronger than before or because Antlar's new body lacked the original's protection was not specified, the magnetic monster was defeated by the Spacium Beam for the first time ever.

Upon the Beta Capsule's activation, Hayata is covered by the Flash Beam (in episodes 3 and 10), then Ultraman emerges from a smokey red background and enlarges, then appears in giant form soon after. It can be assumed that the sequence takes place in a very short time and is the depiction of Ultraman enlarging, similar to his growth technique. The tokusatsu effect of the emergence from the smoky red background and three-stage enlargement was achieved by slowly moving an Ultraman prop figure towards the screen with a red background. Whenever Hayata transformed in a later series, the original clip was used until Ultraman Mebius & the Ultra Brothers. After separation from Ultraman after a battle, Hayata will be brought back in rings of light.

Shin Hayata appeared in Ultraman vs. Kamen Rider, although it was only in the beginning where he transformed into Ultraman who then left to fight the monster Gadoras.

At the end of the manga, Hayata discovered Akiko Fuji, his friend had been possessed by Alien Baltan since their first encounter, trying to monitor the Ultra in order to create their ultimate weapon: Zetton. At the end of the battle, Ultraman separated from Shin and joined with Zoffy who gave Shin and Akiko the Life Forces he had. Zoffy/Ultraman returned to the Land of Light so he could be healed of his injuries.

The first protagonist of the Ultraman Series now forty years after his merger and separation from Ultraman. He now has a son who has inherited his legacy as the 'Ultraman'.

"You will remain in your present form as Hayata, but now--
take this Beta Capsule."

Aboard the submarine, from "Ultra Operation Number One." 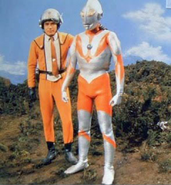 Susumu Kurobe, uniformed as Shin Hayata, with Bin "Satoshi" Furuya suited up in his "Ultra Armor."

Hayata transforming into Ultraman in Mebius.

Shin with Mirai and Dan

Hideki, Shin & Seiji from the left to right, respectively