Ultraseven: The Final Chapters: "I Am an Earthling"
Ultraseven EVOLUTION Novel (Cameo)

Sandayu Dokumamushi
Shigeru Furuhashi (フルハシ・シゲル Furuhashi Shigeru) is one of the members of the UG, 29 years old in the first episode of Ultraseven. At the start of the series he had been on the Garrison seven years, originally from Hokkaido.

Coming from a wealthy family that lived in Hokkaido Return to the North!, Furuashi is rather comedic as he suffered injuries when dealing with certain situations, such as convincing Zero One that he was Dan Moroboshi Android Zero Directive, etc. Despite this, he is very serious when dealing with alien attacks, such as nearly self destructing his ship when it was attacked by Alien Kanan. Return to the North!

Sometime after Metron's second defeat and Seven's disappearance, a certain incident occurred that presumably took the lives of either his 2 fellow crew and, according to the novelizations, some TDF members. He told Kaji, his only known surviving crewmate, that he's enough with such sacrifices. That infuriated Kaji, who blamed him for his bad decisions, and ultimately quitted Ultra Guard. Legends and Glory

Sometime later, Furuashi was promoted to General. Lost Memory Then, Masaki Kazamori (who was one of the members of the era's Ultra Guard and would later be Ultraseven's human host) was trapped by Dan and then Dan took the form of the young man who always talked with Furuashi as they were both members of the original U.G. team. Eternal Earth

Years later, he was supposedly retired from being a TDF officer. However he, along with several others, was killed during Alien Valkyrie's rampage in the Moon Base. Legends and Glory It was later revealed that he was revived and was sent to Earth 10,000 years ago to witness the destruction of their homeland at the hands of the invaders, the later became the ancestors of humans. He was put into suspended animation until a disguised Nonmalt opened the ancient casket that contained him for Dan. After revealing to Dan the truth about the Nonmalts and humanity, he urged him to side with the later believing that they are capable of forgiving their ancestor's mistakes. After Ultraseven killed Zabangi and separating Kazamori from him, Furuhashi returned to Moon Base. He announced the entire universe that the Friendship Plan, which was implemented by his ex-crewmember (Kaji), was abolished and the beginning of peace between it and the Earth. Dan, who was with him, told him that he won't be able to watch the said peaceful fate given what he had done during his battle with Zabangi. However, he admitted that he loved the Earth so much despite that he didn't know about it. Furuhashi, knowing Dan was both a friend and an Earthling to him, offered his and the Earthling's protection for him. Dan turned down his offer and instead revealed his true identity to him and left to face his awaited punishment. I Am an Earthling 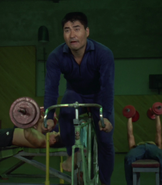 Soga and Furuhashi confronting a stranger

Furuhashi and Soga being confined in Pointer after being injured

Furuhashi after smoking a tampered cigarrette

Furuhashi reacted after he was given order by Kiriyama to patrol his homeland, Hokkaido

Furuhashi (as a UG Captain) in 1994 TV Specials

Furuhashi, with Kaji on his side, went tears of joy after seeing Ultraseven back in action from his comatose

Furuhashi meeting with Anne and her son

Furuhashi in Planet of the Earthlings

Furuhashi (as a Terrestrial Defense Force staff) in 1998 OV

Furuhashi in 1999: The Final Chapters

Furuhashi badly overwhelmed by Alien Valkyrie, which made him look like a suicide

A dying Furuhashi meeting with Dan for a final time

Physically reconstructed from Tachyon particles, Furuhashi was sent to 10,000 years ago

An ancient casket (Oparts) revealing a sleeping Furuhashi inside

Furuhashi and Dan in the Moon Base memorial site