None
Shiela (シーラ Shīra) is a Kaiju that appeared in the TV series, Ultraman Tiga. She appeared in episode 32. Her original name before being mutated was Shilakiit (シーラキート Shirakito). Once an ordinary cockatiel, Shiela came to exist in her present form after a tragic accident which killed her owner. The monster vowed to get revenge, but was finally granted peace by Ultraman Tiga, and, reunited with the spirit of her owner, departed Earth to find a new home.

Shiela was an average cockatiel in the possession of a young girl named "Asami." However once the highly dangerous and powerful Zelda Gas was accidentally knocked over, Asami freed Shiela before she was tragically killed in a massive explosion, which also mutated Shiela into a giant monster. Taking residence inside of the Asama Mountains, Shiela grieved constantly over the death of her young owner and so sought out to avenge her death by destroying the Zelda Gas once and for all, which was located inside of a research facility known as "Zelda Point." Shiela's first attempt however was thwarted by GUTS's arrival and assault and so was forced to retreat after a shot nearly hits her left eye.

Continuously haunted by Asami's death, Shiela emerged from the volcano again to try and reach Zelda Point. However, she was once again opposed by GUTS, who refused to let the mutant go through with her plan. Daigo transformed into Ultraman Tiga in order to help GUTS in holding off Shiela, however the prior injuries Daigo sustained were translated onto Tiga's body. Shiela was also injured, her body was not able to last long in the world, due to either her prior injuries, the Zelda gas or both, but she wouldn't give up on destroying it, even while coughing up blood. With the help of the dying Dr. Masachika Nezu (the father of Asami), Shiela absorbed the last bit of Zelda Gas. With Shiela's deed done, Tiga and GUTS carried her dying body into space where she and Dr. Nezu spirit took the form of light, purified from the horrible fate they carried. Thus, Shiela's left eye healed and shifted into a phoenix-like appearance which GUTS saw in amazement. Tiga then releases a trail of light for the newly reformed Shiela to follow, along with the spirit of Asami happily riding on Shiela's back, the trio left the Earth in peace. 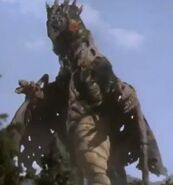