Shepherdon (シェパードン Shepādon), or Shepardon, is a kaiju that appeared in Ultraman Ginga S. Following its apparent murder by Verokron, Shepherdon currently lives on as a Spark Doll, utilized by Ultraman Victory and his fusion, Ultraman Ginga Victory.

Long ago, Shepherdon was a monster that peacefully coexists with the Victorians and befriended with one of them, Hiyori. However, when a civil war ensued between the use of Victory Lancer, Shepherdon was influenced by the battle and rampaged until a Victorian used the item and becomes Ultraman Victory to stop it. Eventually Shepherdon returns back to its former self but in the aftermath of battle, several Victorians had banished to the other dimension, among them was Hiyori. While the remained ones had their memories forgotten, but Shepherdon still regains it.

In modern times Shepherdon lived in harmony with the Victorians, coming to the surface when Alien Chibu started to steal the Victorian Stones. As the first stone was being taken by Android One Zero, Shepherdon made his attempt to reclaim it but, was attacked by UPG and was forced to retreat while the stone was taken. It appeared again only this time he was too late to grab another one of the stones. Just then Zero One MonsLives into the monster, EX Red King. Both monsters would slash and beat each other with their massive arms and hands. EX Red King gets the upper hand when he uses his Shockwave Eruption attack and severely injures Shepherdon. Then, Ultraman Victory appears and tell Shepherdon to retreat, leaving the new Ultra, then later Ginga, to fight EX Red King.

Following this, it had resurfaced multiple times, among them were:

In episode 10, Shepherdon was seen watching Victory bleed as a result of Doragory biting into him and later was using his crystals to help heal Shou. He later went up into the surface to help Shou just as he was about to get by Verokron's missiles and used his Victorium Flash to send him flying. After Verokron duplicated himself, he stood in front of Victory and let himself be hit by his missiles. Seemingly died from the missile, what remains of him turned into a Spark Doll and, after a talk with Queen Kisara, Shou UlTrans it into a Shepherdon Saber and defeat both Verokron and Doragory. Holy Sword to the Future

Though now mostly supporting Victory as a Spark Doll, Shepherdon's Spark Doll would later be confiscated by Commander Masanori Kamiyama, to further charge the Victorium Cannon. This however proved to be his downfall when Shepherdon's energy overloaded the cannon until Exceller and his Chiburoids hijacked the base and teleported Kamiyama and his coworker to the middle of nowhere, claiming the whole base as his while Dark Lugiel fused with the base and formed Vict Lugiel. However, the Spark Doll was retrieved by One Zero, who deliver it to Ultraman Victory.

Shepherdon reappeared in Ultra Fight Victory when he was revived by Ultraman Victory Knight via the Knight Timbre to fight Lunaticks while Victory dealt with Victory Killer. The two defeated their opponents with powerful beams, before Shepherdon healed Ginga and Ace before turning back into a Spark Doll, knowing that his work here was done.

Energy Restoration
Add a photo to this gallery
Shepherdon Saber

Shepherdon Saber (シェパードンセイバー Shepādon Seibā) is an UlTrans activated by Victory after Shou scans the Crystal Spark Doll on the Victory Lancer's Live Sign. It is unique among his UlTrans since it does not alter his right arm, but it summons a weapon. Victory Knight is also able to use this UlTrans, alongside the Knight Timbre.

―UlTrans announcement via the Victory Lancer

After Shepherdon's supposed death, what remains from him reconstituted into a Crystal Spark Doll (クリスタルスパークドールズ Kurisutaru Supāku Dōru). While Shou mainly used it as Victory's Shepherdon Saber, for once, it had been confiscated by Masanori Kamiyama and used to empower the Victorium Cannon until the Live Base had been taken over by Alien Chibu Exceller, with Dark Lugiel fuses with it and formed into Vict Lugiel. But eventually, One Zero managed to get inside and returned the Spark Doll to Shou/Ultraman Victory all while she busy sabotaging his inner system. 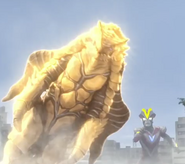 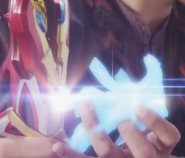 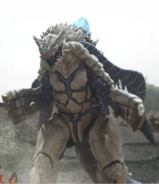 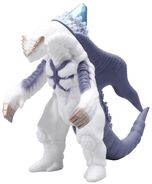 Shepherdon Saber DX Toy
Add a photo to this gallery
Retrieved from "https://ultra.fandom.com/wiki/Shepherdon?oldid=424040"
Community content is available under CC-BY-SA unless otherwise noted.