Sheltar was a peaceful creature that lived beneath the seas until ZAT launched a new rocket into the ocean that accidentally got lodged in the beast's mouth, causing it great agony. The monster came ashore to try and remove it, but try as it might, the rocket would not move. Realizing how much pain the creature was in, ZAT prepared to remove the rocket, but they accidentally removed its tooth by mistake, driving the poor creature into a pain induced rage, heading for the nearby city. ZAT tried to head it off and stop it from causing any damage but couldn't manage to get its attention as it began destroying everything in its path. As the creature loosed its flames on them, Kentaro decided it was time to bring Ultraman Taro's power into the fray and attacked the creature before rescuing his team mate and his mother. He then attempted the Strium Beam but the creature proved to completely withstand the attack! As the physical battle raged, Taro managed to slam Sheltar to the ground and tied him up with electric wires then pried its jaws open with a metal tower. Finally, Taro managed to kick the rocket from the beast's mouth, only to watch ZAT fire the rocket back into its mouth and detonated it, blowing Sheltar's body to bits. 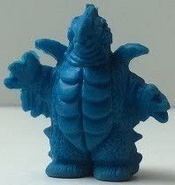