Shalbandes is named after Augustin Charpentier, a French physicist who studied the size–weight illusion, which is also called the Charpentier Illusion.

Shalbandes had been dormant throughout the day, until it started to make objects float, including a bin, a car, and then an entire building, which were caught on the news. Eventually, at night, Shalbandes suddenly appeared in the city, causing mass destruction. Gauma attempted to "control" it with his Kaiju user powers, but found that he was unable to. A dragon-shaped item in Gauma's bag started to flash, summoning Dynazenon who took in Gauma, Yomogi Asanaka, Yume Minami and Koyomi Yamanaka, who were in the vicinity, as its four pilots. Shalbandes then fought against Dynazenon using its lightning beam and levitation abilities, but before it could impale Dynazenon with its spear-like head, Dynazenon changed into Dynarex, who easily turned the tables on Shalbandes and lifted it into the sky, destroying it with the Rex Roar. What is a Kaiju User? Although they don't appear until much later on, Gauma implied that the Kaiju Eugenicists were behind Shalbandes' attack. 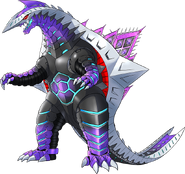