Sevenger Fight (セブンガーファイト Sebungā Faito) is an Ultra Fight-inspired miniseries set in-between episodes of Ultraman Z, which this series acts as a spin-off to. As opposed to other recent supplementary shows in the Ultraman Series, Sevenger Fight takes most of its influence and aesthetics from the original Ultra Fight and its direct-to-video 'follow-up', Ultra Super Fight.

Episodes 1 to 7 were first released through the TSUBURAYA IMAGINATION streaming service and later livestreamed with English subtitles during the first Ultraman Connection Live event. The episodes could then be viewed on the site only by people who bought tickets for the event,[1] before being made available to all users shortly before the second Ultraman Connection Live. Episodes 8 to 10 can only be found in the Ultraman Z Super Complete Works STORAGE BOX DVD and Blu-ray set. They are collectively known as the Suflan Island Trilogy (スフラン島３部作 Sufuran-jima San Busaku).[2] 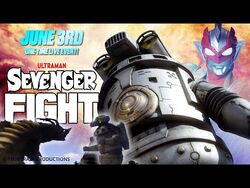 On June 3rd 2021, a special one-off live event where the first seven episodes of Sevenger Fight was streamed live exclusively for international fans with full English subtitles. The event was be held on Ultraman Connection at 9PM EST and 6PM PST. Standard tickets to this event were $12.50, however there was an option to purchase a ticket that comes with an exclusive Sevenger themed pin badge for $25. Only 500 of this pin were made and distributed on a first come first serve basis.

Said stream also featured a live discussion hosted by Sean Nichols, with special guests Rima Matsuda, Takaya Aoyagi and Kiyotaka Taguchi. At the end of show, an Alien Barossa possessed Sean and forced the guests into a game of charades with Sevenger acting out the clues. The guests having correctly guessing the answers enraged the Barossa who summoned a Zetton to finish them off. Sevenger was overpowered by them until Ultraman Z and Juggler arrived to aid in the fight, leading to the two villains' defeat.