"This is the Robot Monster Sevenger, which was held inside the Monster Ball. Since Seven can't transform, the Land of Ultra has given him a new weapon."

Sevenger (セブンガー Sebungā)[1][2] is a Capsule Kaiju who first appeared in Ultraman Leo, as the fourth official member of Ultraseven's set of Capsule Monsters. After a long absence, a second Sevenger appears in Ultraman Z, this time as a human-built machine and part of STORAGE's arsenal[2].

One of the most powerful Capsule Monsters to be created from the Land of Light, Sevenger was encased inside a capsule-like object and was on his way to Earth, being transported by Ultraman Jack to Dan Moroboshi, as Dan couldn't transform due to his Ultra Eye being broken. Unfortunately, Jack was ambushed by the space monster Ashuran, and Sevenger was lost on Earth during the battle.

Once Jack and Ashuran landed on Earth, Ashuran went on a rampage, destroying anything in his sights while facing off against MAC. Meanwhile, Jack (as Hideki Go) was trying to locate Sevenger's ball to stop the monster. Upon locating it, Jack returned to assist MAC and gave the ball to Dan, who desperately used the capsule, unleashing Sevenger to battle the monster itself. Surprisingly, Sevenger was able to handle Ashuran in battle with ease, easily beating down the monster despite all that was thrown at it. Even when Ashuran managed to throw Sevenger to the ground, the heroic machine responded by simply rolling over its adversary before getting to its feet and unleashing yet more powerful punches and slaps. However just as it seemed Sevenger was about to finish off Ashuran, it retreated back into his ball in a flash of bright light, having ran out of time.

With Sevenger out of action, Ashuran grew cocky, as he knew that the three Ultras were unable to stop him for the time being. Fortunately, Sevenger's efforts were not in vain, as Jack and Leo faced the demon in battle and swiftly took him down.

Afterwards, Sevenger remained with Dan while Jack returned to repair the Ultra Eye, and has remained in his possession ever since.

Sevenger along with many other monsters are seen cheering on Ultraman Ginga as he fights Dark Galberos.

It is likely that Sevenger returned to space in its original form after Ultraman Ginga defeated Dark Lugiel.

Sevenger was the very first anti-monster robot built for use by STORAGE, and is also used for disaster-relief missions such as removing rubble. When fighting, Sevenger's neutral eye expression changes to become serious. Its pilots are Haruki Natsukawa and Yoko Nakashima on a rotation shift.[7][2] Sevenger's first fight was against a Namegon, after GAF America failed to capture, leaving it unchecked for two weeks. Sevenger's success convinced GAFJ that robots were a viable option as anti-monster weapons.[8]

Sevenger battles against a host of monsters, aliens and robots, with both familiar faces and lesser-known characters facing him in battle.

Eventually, Sevenger was used less and less by STORAGE as successively stronger threats began targeting Earth, and was finally decommissioned by GAFJ after it was defeated in battle by Grigio Raiden, with the success of King Joe STORAGE Custom being a primary motivator for its retirement. After being repaired, Sevenger was sent to a museum to promote the SC. Four-Dimensional Capriccio

Though it seemed as if Sevenger would never be used again, Kojiro Inaba devoted some of his spare time to keeping the machine in full working order, and continued to do so after STORAGE was disbanded following the team's attempts to prevent the D4 Ray from being used. Sevenger was later reactivated by Yoko after Alien Barossa III attacked, and proved crucial in the battle that ensued, joining up with Z and King Joe STORAGE Custom in fighting Barossa and Five King. With the help of King Joe's Separate Mode and the Beliarok, who was convinced by Yoko to let Sevenger wield him (thus becoming the third being to use the Beliarok, after Z and Alien Barossa II), Sevenger defeated Barossa with a three-way improvised combination technique, the Sevenger Wave Riding Special Slash, in which Sevenger strikes at the opponent with the Beliarok whilst standing atop King Joe's Leg Carrier traveling at high speed. Individual Tomorrows

"It may be an antique, but it's still useful!"

Despite being the weakest of the three Special Airborne Armor Units that remained, Kojiro Inaba managed to reclaim Sevenger for the final battle to assist Windom and King Joe SC in rescuing Yoko from Destrudos, going as far as to provide a spare battery for Windom as well. Alongside King Joe SC and Windom, Sevenger stood down during the final minutes of the battle to make way for Z's last stand against Destrudos, the three machines having proven pivotal in paving the way for Z's eventual victory. Warriors Shining Beyond

Following the conclusion of Ultraman Z, Sevenger was fully promoted back to being one of STORAGE's primary operating units, and was eventually given an additional configuration for operation in outer space and on other planets, being designated as Space Sevenger. On one of its initial missions, in which it journeyed to a planet inhabited only by monsters in search of Z, Sevenger was ambushed by the monsters and was severely outnumbered. The Lawless Monster Planet Fortunately, Z and Juggler arrived to help Sevenger, and the trio took down the monsters that had been threatening the machine. The Return of the Red Guy

Returning to Earth, Sevenger fought Beam Missile King,The Fortress Robot of Horror Gandar and Pestar Burning! Freezing! Hell!! before facing a second tag-team battle, this time from a group of aliens and a single monster composed of Alien Akumania, Alien Boze, Alien Kettle, Oni-on and Satan Beetle. Leo arrived and joined Sevenger in fighting the group, with the two ending up being the victors of the ensuing confrontation. Time for the Eye of the Lion to Shine

A fourth Alien Barossa arrived on Earth, stealing King Joe STORAGE Custom. Ultraman Z and Space Sevenger gave chase, with Yoko in the pilot's seat. As the two were about to catch the pirate, he connected Bullton's two parts, sucking everyone into its dimensional wormhole. As Sevenger was about to be sucked in too, Z held the machine back, leaving it and Yoko inside the only ones to not be sent to the Earth in Ultraman Trigger's universe.Inter Universe 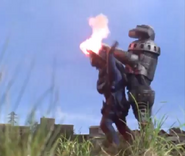 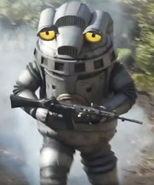 SAA Support Weapon 40mm General Purpose Autocannon
Underwater Sevenger
To combat the threat on Diplas in underwater area, Bako lead his men into modifying Sevenger as a water-oriented combat robot, to which they declare as Underwater Sevenger (水中セブンガー Suichu Sebungā).

Type 18 120mm Monster Cannon
Space Sevenger
At some point after Haruki/Z's departure from Earth, STORAGE upgraded Sevenger to be as strong as King Joe STORAGE Custom as well as the capability to explore the outer-space designated Space Sevenger (宇宙セブンガー Uchū Sebungā). Yoko piloted it together with Yuka in their outer space trip to test out the warp technology. As part of the upgrade, Sevenger was given a high performance battery with an indeterminate time limit, allowing Sevenger to remain active for significantly longer periods of time.