"You can't change into Ultraseven, it will bleed all of your energy. And not only that, you will no longer be able to return to M78!"

―Seven's superior warning Ultraseven/Dan of the consequences of transforming while his body was in such a terrible condition.

Hiroji Kaminishi
Seven's Superior (セブン上司 Sebun Jōshi) is a being from the Land of Light that appeared in the last two episodes of the Ultraseven series. While unnamed in the original series, he was referred to as Alien M78 (M78星雲人 M78 Seiunjin) in the script, and in the TNT English Dub he is named Rutler.

Seven's Superior, unlike Zoffy, had disappeared from television after the events from the Ultraseven TV series. Even Tsuburaya Productions has admitted they had forgotten about the character. But he was brought to their attention around the time of Television and Film's "Third Monster Boom", and he was given the provisional title of "Seven's Superior", which has since become the character's official name[1]. Some children's magazines have referred to him as Big Seven (ビックセブン Bikku Sebun)[2], while some record books on the making of Ultraseven refer to him as "Seven's Superior of the Inter Galactic Defense Force" and others as the "Higher-Class Ultra Fighter from the Space Guard". And as of the present he has never been developed into an independent character.

The Superior appeared in the 1967 manga adaptation of Ultraseven by Daiji Kazumine. Though, unlike the TV version were the Superior had the same appearance as Seven, the manga version had apparent differences: his Eye Slugger had a jagged shape resembling a mohawk, and Sofubi figures based on Kazumine's redesign gave him blue eyes. The character later appeared in another comic story published in "Figure King magazine", titled "Volume of God" where he sported the same design by Kazumine.

This character's personality is very similar to Zoffy's, he acts with a dominant and serious nature, but is shown a caring side as he sees Seven in grave danger. However, a cynical trace is seen in him that is not seen in any other Ultra, in that he didn't care for humanity at all, seen when he told Ultraseven he shouldn't sacrifice himself for a race that is not his own, which contradicts completely the order to the Inter Galactic Defense Force to patrol space to protect it from conflicts and destruction, and the reasons why the other Ultras are sent to protect Earth. However, events from the Ultraseven series makes up for this personality. The foolish things humans had done throughout the series (e.g. Testing the Super Weapon R-1 on Planet Gyeron; causing many species to become extinct, etc.), allowed Seven's Superior to see the ugly side of humanity, thus giving him the personality seen.

Also there is the fact that Seven's Superior never came to Earth, the Ultra Brothers all came to adore the people of Earth due to their prolonged time on the planet while he had not and therefore bore no connection to humanity. Seven's original series was meant to be more mature and was originally intended to be separate from Ultraman's despite the two coming from the same place.

Ultraseven fought so much on Planet Earth, his energy was almost depleted, after Dan Moroboshi was weakened, he decided to rest. Suddenly, a hologram of a being similar to Ultraseven, appeared in front of Dan, telling him that he is unable to fight, and that he should go back to his home world, Dan refuses, as he wants to stay on Earth to keep defending it, the hologram begins to get angry, and takes Moroboshi's Ultra Eye and throws it at a clock.

After the UG began battling the Alien Ghose, who had recently unleashed Pandon, Moroboshi saw his teammates in danger, and decided to transform. The mysterious Ultra appeared before him once again, and warned him of the risks to his life if he were to attempt to transform, but Moroboshi disregarded his words for a second time, and transformed into Seven.

The same day at night, Moroboshi was completely hurt, but he still escaped from the Ultra Guard without anyone noticing. At night, he fell unconscious in his car, he was rescued by a boy and his mother, after he stayed in the boy's house a while, he saw the news that the most important cities in the world were destroyed by the aliens, he decided to leave, but he was stopped again by his superior, and he said that he should not transform, that he shouldn't sacrifice his life for a race that is not even his own, but Seven disobeyed him, and after transforming and destroying Reconstructed Pandon, he flew back to the Land of Light, in Nebula M78.

There are several theories among fans about Seven's Superior relating to his appearance and/or his relation to Ultraseven.

Manufactured by Yamanaya, this soft vinyl figure of Seven's Superior is molded in a proportion of a Bullmark Ultraman figure. He features 5 points of articulation on the neck, arms, and angled legs. His arms are molded in a signature pose that he used to prevent Dan from transforming into Seven in The Greatest Invasion in History Part 2.

This Ultra Hero Series-like figure (though slightly taller) of Seven's Superior is based on Daiji Kazumine's design.

Superior warns Dan not to transform

Superior prevents Dan from transforming for the first time

Superior prevents Dan the second and the last time

The Superior and Dan 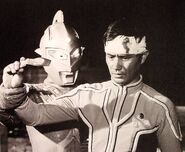 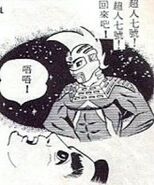