"Don't lose your kindness. Caring for the weak, helping each other and making the effort to become friends with those of other lands no matter how many times you're betrayed."

Seiji was a truck driver for an orphanage, and was delivering bread for the children when the first Terrible-Monster Verokron attacked Tokyo. Seiji bravely continued on his way back to Orphanage to evacuate the children with his truck but the missile Terrible-Monster obstructed his truck off to the side of the road. Undaunted, Seiji continued to the Orphanage. After arriving he help a nurse, Yuko Minami, move all of the children to a save bunker. Both Seiji and Yuko return into the Orphanage building to rescue any remaining children, however Velokron's missiles brought the building down on the two brave humans, killing both of them. Ultraman Ace saw the heroic action of the pair from afar and gave to them his life and the Ultra Rings, so that the three of them would fight against the Terrible-Monster and their evil master, Yapool.

Later after the defeat of Lunaticks, Yuko revealed herself to be from the long destroyed Lunar civilization of the moon, and returned to wandering the cosmos with her people, since the beast responsible for her home's destruction had finally been slain, leaving Seiji the sole owner of the Ultra Rings and sole host to Ace, though she returned once in a while to visit Seiji. Due to this, Seiji was targeted by Yapool.

During the Alien Simon incident, Seiji was pushed into a position where he would have to risk revealing his identity. Despite warnings from Yuko that doing so would leave him unable to return to his human form, Seiji eventually revealed himself when the situation forced him to do so. Despite this, Ace was still able to return to Seiji during later appearances.

In episodes 33 and 34, he returns with Shin Hayata, Dan Moroboshi, and Hideki Go. The group gathered for a celebrative barbecue with Taro and Zoffy in human forms. Unfortunately the Ultra Brothers' celebration was interrupted by Alien Temperor. For a time the Ultras switched hosts. Eventually they transformed and defeated the evil invader and returned home. He always wanted to help Kotaro unlike the rest of the Ultra Brothers. 5 Seconds Before the Great Explosion of the Land of Ultra!

He was angry at Kotaro for his arrogance of defeating Temperor. The Last Day of the Six Ultra Brothers!

He also appears in Ultraman Mebius with Yuko Minami. He telepathically contacts Team GUYS and directs them during their battle with Lunaticks on the moon. When Mebius was defeated by his old enemy Yapool, Seiji/Ace telepathically contacted him and gave him the strength to rise again allowing the young Ultra to defeat the other dimensional demon. When Team GUYS was being pressed by Lunaticks, Seiji transformed into Ace once again and defeated Lunaticks after a long battle. Ace's Wish

An alternate reality version of Seiji also appeared in this movie as an alternate version working as a baker and married to an alternate Yuko (who was an Earth-born Human). Along with the other Ultra brothers he was at a loss when Mirai claimed he was his 'brother' (brother in arms). At the end he and the other four transformed into their Ultra forms and destroyed Giga Khimaira and the Black Silhouette. During the part where Hayata's and Moroboshi's wives talk to them, Seiji telepathically contacts Yuko unknowingly (or she sensed him). The scene also implies the four were aliens and the basis for the Ultraman Series, and that after living as humans for so long they forgot their pasts. In the end Seiji and Yuko fly into space with the other Ultras and their families to what is suspected to be M78. Great Decisive Battle! The Super 8 Ultra Brothers

Seiji appeared in the Ultraman Saga movie with Dan, Hideki, Hayata, and Gen, each serving as the mouthpiece for their Ultra counterparts. They met in the Land of Light when Seven/Dan noticed that Zero had just moved to another universe. While they questioned why he would do that they also noted that something was going around different universes and taking monsters, even some from the Monster Graveyard. They noted that it was a powerful source of minus energy and that unfortunately they could only monitor a few of the countless alternate space-time zones. Ace and the other Ultra brothers would fly to the alternate Earth to assist Ultraman Saga against Alien Bat's monster weapons. Ace would face his old enemy Verokron again and defeat him with the Metalium Beam.

Ultra Rings: Hokuto and Minami are each given a ring to summon Ultraman Ace. When the rings touch, both hosts combine to form Ultraman Ace. After Minami left back to the moon, Hokuto wore both rings and was able to transform into Ace on his own. 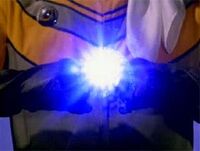 Seiji and Yuko, as originally portrayed by Kaori Seki

Seiji and the original Yuko (2)

Seiji and the original Yuko (3)

Hideki, Shin, and Seiji (from the left to right, respectively)

Retrieved from "https://ultra.fandom.com/wiki/Seiji_Hokuto?oldid=538579"
Community content is available under CC-BY-SA unless otherwise noted.