Ultraman Trigger: New Generation Tiga episode 18 "Smile Operation No.1"
Segmeger (セグメゲル Segumegeru)[1] is a poisonous, space kaiju that debuted in episode 5 of Ultraman Taiga, in which an individual served as a planet-invasion monster under the control of Alien Seger Aoi.

Its name is derived from Egyptian goddesses, Sekhmet and Meretseger.[2]

Due to the origin of its name, Segmeger's design comes from snakes and lions and is meant to look like a snake from the side and lion from the front.

Segmeger is one of many planet-invading monsters used by the Alien Seger used to conquer planets with suitable conditions for their race. One Seger named Aoi decided to attack Earth with her own Segmeger.

Segmeger first fought Ultraman Taiga, poisoning his left arm with the Seger Flame, which transferred the damage over to Hiroyuki Kudo as well. Taiga destroyed it using the Strium Blaster after a brief fight, but Hiroyuki had to get a cast over his arm afterward. Alien Damara then came into the EGIS base to warn them that his planet was destroyed by Segmeger, and that it would continue to return as long as its summoner was still around.

Aoi summoned Segmeger again after she thought that Pirika Asahikawa, whom she met recently and became friends with for a short time, was spying on her. Taiga, Fuma, and Titas fought against Segmeger but their efforts were insufficient even when Taiga blasted it with the Mons Beam Ray. Ultraman Fuma also had a difficult time with Segmeger and switched with Ultraman Titas, who chopped its tail off. Titas was sprayed with Segmeger's poison blood that came gushing out of its wound, disorienting him, which allowed Segmeger to knock him down. Pirika managed to convince Aoi to do the right thing, so she used her crystal ball to give up her life force, which then entered Titas and healed him. Titas then pounded Segmeger and finished it off with the Electro Buster, turning it into a ring that Hiroyuki collected. The Future You Decide

Tregear revived Segmeger and other monsters from their rings to fight alongside him and the Grimdo-possessed Ultraman Taro against the New Generation Heroes. Segmeger fought against Ultraman X, and receives a power up from Grimdo. However, Ultraman Orb transforms into Orb Trinity to finish off Segmeger. Ultraman Taiga The Movie: New Generation Climax

Segmeger was one of the many monsters affected by the Devil Splinters and turned berserk. It is seen rampaging alongside a Bemstar and a Majappa. A Warrior's Principle

Millions of years ago, a Segmeger belonging to the Terran Protection Team fought against Trigger Dark.[3] As it was about to overwhelm the Dark Giant, Carmeara arrived and aided Trigger Dark in destroying the beast. Smile Operation No.1 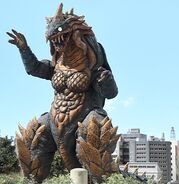