Ultraman Tiga episode 5 "The Day the Monster Came Out"

None
Sealizar (シーリザー Shīrizā) is an undead Kaiju that had washed up on the beach by Kitagawa City. He first appeared in the TV series, Ultraman Tiga in episode 5.

Sealizar had been dead for several years and suddenly washed up next to the city of Kitagawa. As his decayed body lied there, the terrible odor of his dead flesh could be smelled all across the city, causing some civilians to hospitalized. GUTS, believing that the Kaiju was totally dead, was called to take care of the monster's body by the public in hopes of finally averting his terrible smell. At first they tried to airlift the monster to dump it into the sea, but shortly after the cables were fired into him, Sealizar awoke and wandered away. Noting that the monster was headed towards a city, GUTS quickly tried to stop it with its missiles, but they were quickly sank into Sealizar's rotten flesh. GUTS's next plan was to melt the monster inside of a natural gas plant, and while the plan was working, the missiles Sealizar absorbed earlier quickly feel out of his body and detonated the plant, causing a massive explosion. Sealizar was freed however and quickly regenerated before moving on his path.

Another plan was devised by GUTS involving using Sealizar's absorption against the monster by tricking it into absorbing an oil tank. But Sealizar took control of the trap and did absorb the tank, but had also endangered Rena Yanase of GUTS by grabbing onto her jet. Daigo Madoka quickly transformed into Ultraman Tiga and battled the monster himself. The fight was at a standstill between Tiga and Sealizar. Sealizar even tried to absorb Tiga by ramming him headfirst into his open stomach. Tiga was beaten around, and it seemed like hope was lost, until Tiga managed to strike the monster with his Zeperion Beam. Sealizar managed to absorb the blast, but the energy ignited the fuel in the oil tank he absorbed, and Sealizar was destroyed by the explosion inside of him.

Ultimate Collection Sealizar is small figurine based on a HG Series capsule toy. His main body was painted in brown, probably to evoke it's patina in the sunset during it's fight with Tiga. Like all of the figures included in this set, Sealizar has no useful articulation.

Thankfully, the only odor you can smell on this figure is pure PVC scent, rather than the show-accurate stench.

Sealizar attempts to absorb Tiga through his stomach 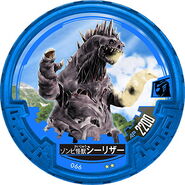 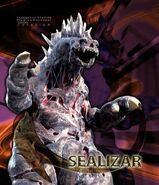 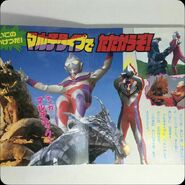