Seagorath was designed after a rooster, while Seamons is based on a hen to further relate their tie as a couple.

Appearing late one night with his mate, the two monsters Seagorath and Seamons attacked a ship full of diamonds and gems by using their weather-controlling powers. After attacking, they disappeared beneath the waves.

Later on, Seamons was having some trouble on land, as she was confronted by MAT, and so she called out to her mate. Seagorath heard the call and emerged from the bottom of the ocean to aid her. Using his own weather control powers, Seagorath created a tsunami hundreds of feet tall and directed it towards Japan. Hideki Go transformed into Ultraman Jack then created an Ultra Barrier and successfully repelled the tsunami back at Seagorath subduing the monster, but lost most of his energy in the process. Seamons easily knocked around Jack, forcing him to leave. MAT then realized that Seamons and Seagorath are trying to mate and use the diamonds for preparation.

Later that day, Seamons was attacked again, this time by Japan's SDF. Seagorath soon appeared himself hearing Seamons call again and both mates used their powers to create a tornado to eliminate the SDF. To ensure they wouldn't attack his mate again, Seagorath stayed with his mate on dry land and the two began their mating process. The next day, Ultraman Jack returned to battle once again but he had a very difficult time dealing with both Seamons and Seagorath and their combined weather controlling powers. Luckily, a newly-tested Laser Gun SP-70 was created by MAT and fired at Seagorath's massive horn, successfully destroying it. Without their advantage of Seagorath's weather control, both mates retreated back into the ocean. Terror of the Tsunami Monsters, Tokyo's Big Pinch Terror of the Two Giant Monsters, Tokyo in a Giant Tornado

Many months later, Alien Nackle revived both Seagorath and Bemstar to test Jack's strength in battle. Re-Seagorath (再生シーゴラス Saisei Shīgorasu) created another gigantic Tsunami, but like before Jack used his Ultra Barrier to repel the wave, and then proceeded to fight Seagorath. He then fired his Spacium Beam, destroying Seagorath's horn. Although never shown, Go's dialogue revealed that he had killed Seagorath after firing its horn. Ultraman Dies at Sunset

Seagorath was a combatant of the Dark Spark War until he was turned into a Spark Doll by Dark Lugiel. He was first seen in the Ultraman Ginga Theater Special as a Spark Doll in Alien Icarus's left hand. After stealing the rest of the Spark Dolls from Misuzu Isurugi, Seagorath, along with Red King, Baraba, Bemstar, Hanzagiran, and King Crab, was dark lived by Alien Icarus along with himself to form Tyrant. When Tyrant was defeated by Hikaru Raido as Ultraman Tiga and Tomoya Ichijouji as Jean-Nine, all of the monsters, including Seagorath, were turned back into Spark Dolls and were then collected by Hikaru and his friends.

In episode 7 of the series, he along with many other monster are seen cheering Ultraman Ginga on as he fights Dark Galberos. 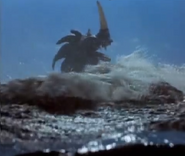 Seagorath became a Spark Doll in the conclusion of the Dark Spark War due to the Dark Spark's powers. His Spark Doll fell to Mt. Furuboshi in the Ultraman Ginga Theater Special along with all of the other Spark Dolls that make up Tyrant.

After Dark Lugiel's defeat, Seagorath's Spark Doll is likely to have reverted back to its original form and departed Earth to return home.

Seagorath was released 2 times in the Ultra Monster Series. Both having the same design and color one has a yellow belly and the other has a orange belly and both have yellow horns instead of white and have a great texture. He has 4 points of articulation. In 2013 he is released as part of the Ultra Monster 500 series. He has a more colored yellow belly, lighter in color and has a smoother texture and a white horn. He also has 4 points of articulation and is #16 in the series. 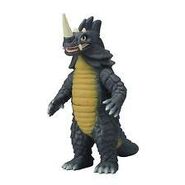 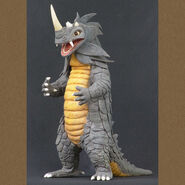 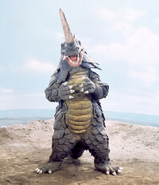 The Making of Seagorath
Community content is available under CC-BY-SA unless otherwise noted.
Advertisement