Seabozu's name comes from the Japanese Yokai Umibozu (translated as "Sea Monk"), with the word "Umi" translated into English, "Sea". In Japanese mythology, Umibozu are gigantic spirits that emerge from the ocean and attack ships at sea.

Seabozu's skeleton motif started out as a fish monster called Gyo, the working title and concept of Sudar from Ultra Q. After Sudar was made an octopus the skeletal fish was reworked bit by bit as the concepts for Dodongo, Gavadon and Gubila though not used for any of them (aside from some design features on Gavadon). The skeletal kaiju concept was ultimately used for Seabozu, but as a bipedal monster resembling Godzilla rather than a quadraped fish/Dimetrodon.

A disturbance from outer space, the Science Patrol investigated the matter to find themselves in the Monster Graveyard, where all aliens and monsters go when they are destroyed by the Ultra Warriors. Nearly all of them except a skeleton-like monster could be identified.

As they returned to Earth, the skeleton monster dubbed "Seabozu," fell from the sky and landed in a nearby city. As The Science Patrol was about to fire, they noticed that the monster wasn't intentionally attacking the city nor trying to harm anyone, but instead it climbed the tallest building in the city as if it were trying to get back into the sky, however after jumping off the building trying to jump into the sky, it fell to the ground below and wandered away whimpering. Finally, the Science Patrol cornered Seabozu in the middle of an open field away from society and opened fire upon the monster. After minutes of senseless violence and Seabozu being unruly attacked, it became obvious to the Science Patrol that Seabozu just wanted to go home to the Monster Graveyard.

The first attempt to send Seabozu home was to tie his hands around a massive rocket that would be sent to the Monster Graveyard. However the plan failed as Seabozu's weight and clumsiness caused the rocket to crash and burn on site. Ultraman showed up shortly afterwards and shockingly attacked the monster (possibly in hopes of knocking it out so he fly it home easier,) but Ultraman's Color Timer was running out and so he had to abandon Seabozu in mid-flight. Finally, a special rocket was designed for him. Ultraman met Seabozu again and ordered the monster to hold onto the rocket to take him home, but the monster's fear and stubbornness kept him from listening, provoking Ultraman at times to attack him into following his order. Finally after he grabbed onto the rocket. He was fired back to the Monster Graveyard where he could live the rest of his days in happiness.

In episode 7, Seabozu and many other monsters are seen cheering on Ultraman Ginga as he fights Dark Galberos. It is likely that Seabozu returned to space in his original form after Ultraman Ginga defeated Dark Lugiel.

This monster reappeared in Ultra Fight.

Seabozu appears in the Japanese variety show, Takeshi's Castle in the special "Monster" episode, Along with Gomora, Eleking, Red King, Pigmon, Kanegon, Alien Icarus, Black King, Alien Baltan, Gora and Zetton. He participates in the game "Boulder Dash" in which he fails in. In the U.S. variation of the show known as "MXC," he is called "The Closet Monster." Unusually, his costume in this appearance has a longer tail than his original appearance.

In the OVA special, Ultraman M78 Theater Love & Peace, Seabozu crash lands on ChibiM78 and was considered a threat by Ultraman, Yullian, Seven and Zearth, until he burst into tears. To cheer him up, Ultras, aliens, robots, and Kaiju alike joined forces to cheer up the sad monster. Eventually, a rocket comes to rescue Seabozu, but he decides to stay on ChibiM78 instead, and is shrunk down to the same height as all the others. 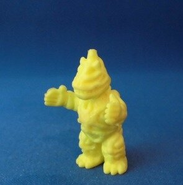 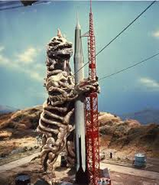 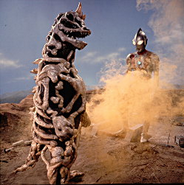 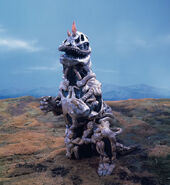 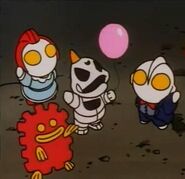 Seabozu as he appeared in a recreation of the 'Man who Created Ultraman' special. 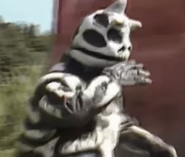 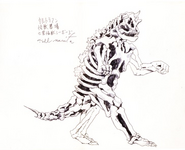