Mirrorman episode 32 "Save You Now! The Sea of Death"

None
Sea Killersaurus (シーキラザウルス Shī Kirazaurusu) is a Kaiju who appeared in the series, Mirrorman.

Sea Killersaurus was used by the Invaders to emit massive amounts of pollution that caused sea life and fishermen alike to fossilize. A research ship was sent to investigate only for the Invaders to take it and Dr. Iwano, the head scientist aboard it. The next day had the other crew members washed up on the shore of Toba and were fossilized. The Invaders taunted Kyotaro not to interfere with their plans, revealing they will kill off the Earth by killing off the oceans and have Dr. Iwano as a hostage. After the Invaders were unable to acquire important microfilm from the professor's daughter, they left Dr. iwano's body and sent Sea Killersaurus after Kyotaro. SGM was alerted to the monster's presence as he continued to emit a deadly pollution from his body.

Kyotaro became Mirrorman using the surface of the water and fought Sea Killersaurus underwater. The hero easily overpowered the monster underwater which forced him to flee closer to shore in shallow water. Neither giant gained an upper hand on the other until Sea Killersaurus unleashed gallons of pollution from his mouth, soaking it all over Mirrorman and numbing his body. SGM arrived in the Phoenixes and noting how badly Mirrorman was doing. Despite a quick missile barrage, Sea Killersaurus managed to stun the hero. Once Mirrorman recovered he continued to fight the monster. Dr. Mitarai authorized the use of an experimental sea fence that removed all the ocean water around Sea Killersaurus. Mirrorman quickly dominated the fight and ended it with combination of the Mirror Crackle and the Mirror Eyebeam to destroy Sea Killersaurus. 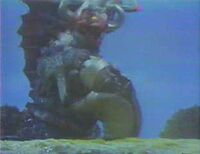 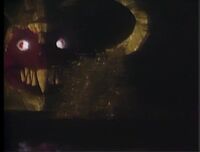 A close up of Sea Killersaurus' face
Community content is available under CC-BY-SA unless otherwise noted.