While Scoradon was resting, a group of teenagers had interrupted its sleep. It burst out of the ground, and created a huge tidal wave that killed a good amount of the teenagers responsible for awakening it. SAF got involved, but their weapons were no use against Scoradon. Daisuke Misaki then proceeded to transform into Fireman.

Fireman battled Scoradon, Scoradon was a fierce and tough opponent. Its heat ray posed a threat and even Fireman couldn't even withstand it. But, he soon began to win by stabbing chunks of rocks into its injuries. Fireman then threw the monster to the side, and as it got up, Fireman fired his Fire Flash at Scoradon's head, decapitating him. 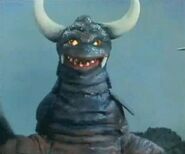 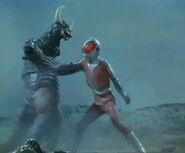 Fireman vs Scoradon
Community content is available under CC-BY-SA unless otherwise noted.
Advertisement