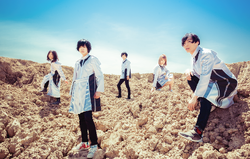 Science of Sound Special Players is a Japanese rock supergroup consisting of members of the bands Owarikara, Pacific Shiranai Orchestra, The Future Ratio, THE Love and Guess. They have recorded two albums with the blessing of Tsuburaya Productions, consisting of covers of songs from various tokusatsu series.

Science of Sound Special Players was formed in 2012, by "elite young musicians" with a love for kaiju films and special effects. Their shows feature a dancers dressed as monsters and heroes, along with a mad scientist who operates a super robot known as Itch Baron.[1]

Five years after their formation, the band worked with Tsuburaya Productions to release albums of cover songs, all of which originated from Tsuburaya's shows.

Retrieved from "https://ultra.fandom.com/wiki/Science_of_Sound_Special_Players?oldid=416110"
Community content is available under CC-BY-SA unless otherwise noted.