To protect humanity from any alien threats and giant monsters

The☆Ultraman episode 50
The Science Guard Party[1] (科学警備隊 Kagaku Keibitai) is an elite squad of soldiers and scientists formed in the wake of mysterious phenomenon across the globe in The☆Ultraman.

The Japan branch of the Science Guard Party is located in the Far East Zone of the Earth Self-Defense Army, which has a vast site built by carving out the trees at the foot of Mt. Fuji. Inside the base, there is a command room where the members work, a lounge in a relaxing space, a coffee room used during breaks, private rooms of each member, a robot factory, and a supermarket. 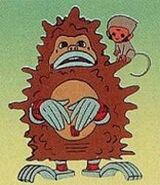