Sarara Tsukifune
Sayuri Tachibana (橘さゆり Tachibana Sayuri) is the deputy captain of Xio. She is mostly gentle but can be severe, acting as a mother to the team. She is in charge of strategy planning and analysis. She is also an expert in lifesaving, basing all her decisions to one goal: no casualties.

Tachibana works as a strategist and Lieutenant in Xio (Xeno invasion outcutters). She works away from her family, who lives in Canada to stay safe from monster attacks. Once, when on a mission investigating Space Beasts, she was trapped, but transformed into Ultraman Nexus to destroy them, before flying to Canada to save her family.

To transform into Ultraman Nexus, Tachibana removes the cover of the Evoltruster and raises it above or in front of her. 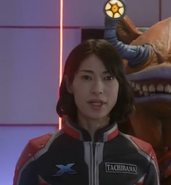 Tachibana is chosen by Nexus

Having a friendly conversation with her daughters 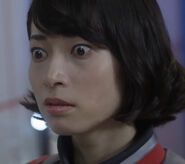