Midori Takei
Sawako Hoshi (星沢子 Hoshi Sawako) was an alien that came to Earth after her ship was destroyed by Gymaira.

20 years ago, Sawako was a peaceful alien until when heading to her home planet, Gymaira attacked her ship killing her mother and turning her dad into a monster. Then her spaceship blew up so she headed to Earth hoping Gymaira wouldn't come to attack her. She lived on an island where she was raised for the rest of her life. She later fell in love with Ito (deputy captain/chief of UGM). Then Gymaira came to the island, but she still stayed there hoping she could stop the monster.

Then when Chief Ito was sent on a mission to detect if the island had any monsters. He was turned into Lavras in front of Sawako. Terrified she took care of Lavras as it was Ito. Then the rest of UGM came when their stuff at their camp was being stolen by Sawako. Everyone thought she was on Gymaira's side until she talked with Yamato and said she wanted to kill Gymaira herself to avenge her father and boyfriend Ito. Then when Lavras was killed Sawako sacrificed herself to keep Ito alive, so she gave her life force to Ito to revive him. Leaving her spirit to inhabit the island. 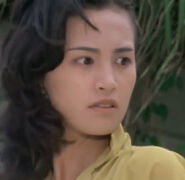 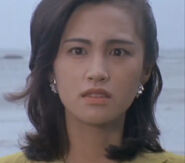 Sawako moments before Ito is turned into Lavras 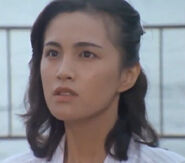