Kaoru Ukawa
Satomi Hayakawa (ハヤカワ・サトミ Hayakawa Satomi) is one of the main characters in the Heisei Ultraseven series.

During her childhood, her father, who was the owner of Sci-Fi only publishing house, brought a man, named Yoshiya Heimi, to Okinajima island, as part of their collaboration in publishing Henmi's book, The Large Flying Iron Lump. When Satomi's father left Okinajima for work, Henmi became Satomi's uncle-figure and they read his book together as part of her bedtime story. At one point,she witnessed her uncle-figure revealing his true form behind the slide doors. Despite this, Henmi's story and his beliefs about "Science being used for justice" became part of her motivations in joining UG. The Sky-Flying Iron Colossus

Kazamori and Satomi went to stores for a gift for their superior's upcoming retirement. However, they were interrupted by Shima reporting about the destruction of Moon Base, where Furuhashi became part of the casualties; and were called back to the headquarters. Legends and Glory Like her fellow members, she was disgusted in Kaji's and, by extension, TDF's actions in conquering the galaxy, and she thought of quitting Ultra Guard. Later, she and Rumi went to Okinajima for a vacation. There, she found her uncle-figure's published book and read during their sleep time. The following day, she told Kazamori about the story but he didn't understand about it while he and Shima encountered a strange metallic object in the mountain. When Satomi and Rumi went back to the boat, she encountered a mysterious man who was interested with Henmi's book. However, he caused her to fall into the cliff leaving the book behind and she was rescued by Henmi himself. Upon awaken in the cave, she met Henmi and she was able to remember about her childhood past with Henmi. Henmi revealed to her that not only he was an alien but also he intended to rebuilt his spaceship by using his book as a hidden blueprint. He also mentioned that Alien Galos became interested with his book and were responsible for her father's death. Upon sensing that three Galos approaching, he left her his drafted second part of his book, in which she read. Later, she met Rumi and used Ultra Hawk No.3 to go back to Ultra Guard headquarters. However, Satomi landed on a area where Ultraseven and Daitekkai were battling, and tried to convince Ultraseven to stop battling it, unaware that Henmi, who was absorbed into Daitekkai, convinced Seven to destroy the core part of the robot. After the robot's defeat, she, along with Ultra Guard members, mourned about Henmi's death and Satomi made a monologue about his story's epilogue. The Sky-Flying Iron Colossus TBA

5 years later, she left Ultra Guard for writing novels. She met Kazamori, who also left from their team, while she was writing a story about a girl and the tree. Dark Side TBA

Satomi attempted to arrest Kazamori for suspiciously being an alien

Satomi, who had been shot by a TDF staff, died in Kazamori's arms

An image of Satomi briefly appeared before the Dragonic Saucer disappeared 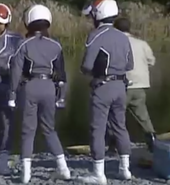