Ultraman Gaia episode 42 "Gamu vs. Gamu"
Satanbizor (サタンビゾー Satanbizō) was an alien that first appeared in Ultraman Tiga, Ultraman Dyna, & Ultraman Gaia: The Decisive Battle in Hyperspace. He later made an appearance in the Ultraman Gaia series in episode 42 as a minion for the Radical Destruction Bringer and an ally of Bizorm.

In another world where Ultraman Gaia was simply a television show, the thirteenth episode, titled "The Devil's Kiss", featured Satanbizor.

Satanbizor was later summoned into Tsutomu Shinsei's world by some children through the use of the Red Sphere, and appeared in the middle of Tokyo park. Tsutomu summoned Ultraman Gaia into his world to face Satanbizor. However, try as Satanbizor did, Gaia managed to hold his own and soon destroyed him with his Photon Edge. Ultraman Tiga, Ultraman Dyna, & Ultraman Gaia: The Decisive Battle in Hyperspace

Gamu Takayama dreamed he was pursuing a strange signal that took him into the city's sewers, while investigating, a strange man attacked him from behind but Gamu managed to shake him off and held him at gun point only to find the mysterious man looked exactly like himself. The man revealed himself as Gamu himself, specifically his gloomy thoughts, about how he and the other Alchemy Stars are shunned by humanity for being smarter, different from the average man.

Gamu refused to admit he held such thoughts and attacked the Black Gamu. However, Black Gamu turn into his true form of Satanbizor, Gamu then turned into Ultraman Gaia and after a brief assault he fired the Photon Edge at Satanbizor. Though he seemed to be defeated, Satanbizor's laughter continued to haunt Gaia on the battlefield.

Gamu was disturbed by his nightmare greatly, but was certain that there was a cause for his dream. Gamu then decided that his XIG-NAVI must have been infected when he was captured by Σ-Zuigul, and had George Leland look into his NAVI. George found a man-made transmission diode with the NAVI, which was the cause of Gamu's nightmares. Gamu then realized if it was a human device that the Radical Destruction Bringer was using against him, then there must be a traitor in Alchemy Stars.

Gamu went to Germany were he learned the origin of Satanbizor, that he was a Spirit Parasite from the Radical Destruction Bringer and the whom the traitor of Alchemy Stars was, a man named Klaus Eckart, who had then given up his humanity in favor of power and became a Spirit Parasite himself, Bizorm.

Satanbizor's human disguise which created with an originating diode that had been planted in XIG-NAVI when Gamu was trapped in Σ-Zuigul. Despite being an ordinary disguise with Gamu's appearance, but the Ultraman Gaia Special Magazine proclaims it as Black Gamu (黒我夢 Kuro Gamu) and Tsuburaya All Monster Photobook instead called him Black Robe Gamu (黒衣の我夢 Kokui no Gamu). Furthermore, his minion, Bizorm can also initiate this disguise without the need of DNA samples. 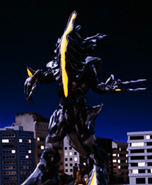