After the majority of his flying saucer beasts perished in battle against Leo, Black Directive was running out of his pets to send after the Ultra Warrior, having only three remaining. Satan Mora, a birdlike kaiju, was his next of his vile behemoths to be called into the war with Earth. While the terrible bird made its way to Earth, Black continued watching Gen, discovering he'd soon be in one of the city's skyscrapers, the insidious alien concocted a plan to use his latest creature. Satan Mora soon reached Earth and was picked up on radar, an onslaught of missiles were launched upon the terrible bird but the beast paid no heed, advancing single minded towards the target its master had sent it to destroy. A squad of jets was deployed to do recon and launched an attack on the beast, but this failed to do anything ether. The monster soon descended on Tokyo, releasing its miniature copies on the people below, causing mass chaos. Finally, the monster attacked a skyscraper, the same one that Gen had been in earlier in the day. The creature attacked curiously, attempting to topple the structure, threatening to kill those inside it. Finally, the building could take no more and threatened to topple over and kill hundreds of innocents, something Gen refused to allow and finally transformed into Ultraman Leo. However, Leo couldn't focus on the airborne abomination and had to hold up the skyscraper, allowing Satan Mora to fly up behind him and stab him with its beak over and over. But even with MAC destroyed, the military was ready to help the hero, firing on the bird but a single blast of its eye beams was all it took shoot their jets from the sky and allow the flying saucer beast to continue attacking the vulnerable Leo as the hero still struggled to hold the skyscraper up so that the last of the civilians could escape. Leo was finally able to release the building, causing the bird to crash into it. The monster still refused to go down without a fight and fought on against the Ultra but ultimately, Ultra Shooting Beam from Leo was all it took to shoot the flying terror down, causing it to crash and explode in a huge fireball. Enraged that his plan failed, Black Directive quickly called upon his second to last flying saucer beast, the bizarre balloon-like Nova. 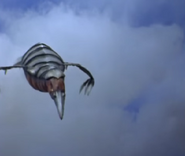 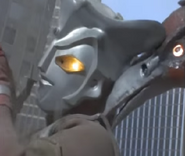 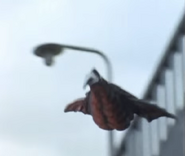 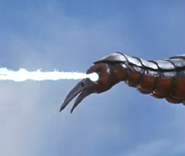 Little Mora (リトルモア Ritoru Mora) were Satan Mora's foot long versions of itself that it launched from its chest to attack smaller targets. 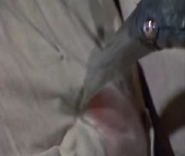 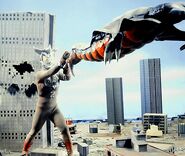 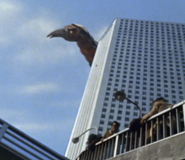 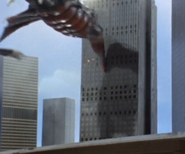 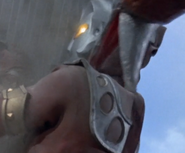 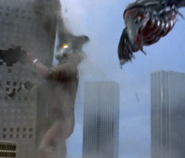