Redman
Sasahiller (ササヒラー Sasahirā) was an alien from the TV series, Return of Ultraman. He first appeared in episode 48.

Sasahiller was an alien who planned to conquer the earth by using his monster Yametaranese to turn all the humans of earth lazy, allowing him to conquer the planet without opposition. As Yametaranese's lazy radiation spread across a city in Japan, Sasahiller watched and goaded all those who were under his monster's influence into falling completely into his plan, even MAT. However once Ultraman Jack managed to partially recover from Yametaranese's Laziness Radiation and send the monster into space where it could live out its days in peace, the alien angrily exited his ship and took matters into his own hands by attacking the city directly. However with Yametaranese no longer within a close vicinity, the lingering radiation affecting Jack's body diminished and with it, Ultraman Jack and MAT were quick to oppose Sasahiller's attack. Ultimately, Sasahiller was no match for the Ultra and was soon reduced into light green foam by Jack's Spacium Beam. 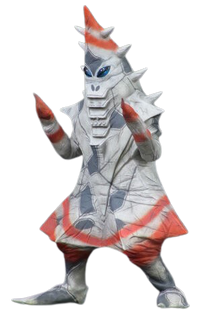 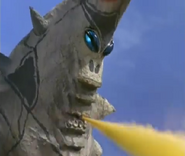 Sasahiller appeared in 4 episodes of the TV series, Redman.

Sasahiller first made his appearance on the show in episode 86 where he confronted the alien hero Redman on the cliffs and fought it out in an evenly matched fight filled with chops, grapples, throws, and punches. When the alien hero summoned his Red Knife, Sasahiller teleported back to the top of the cliff where they tumbled down from and Redman followed pursuit but the former knocked away the weapon and continued to come at him. After he downed him, the hero defeated the alien by elbowing him in the face.

The alien reappeared in episode 90, where he teamed up with Ghostron to take down the alien hero. However, they were easily sent tumbling down the hill when they began to fight the hero there, but they refused to back down and kept going at him, leading to an evenly matched fight. After defeating Ghostron, Redman took his attention on Sasahiller and he killed him by lifting him up and using his Red Fall technique, pilling him on top of the fallen monster.

In episode 91, Sasahiller showed up to fight and defeat Redman after Peguila failed to do so. They had a long fight which consisted of both sides throwing, grappling, punching, chopping, and dodging each other's moves. The fight eventually ended when the alien hero summoned his Red Arrow and stabbed it on the monster's head, killing him in the process.

Sasahiller's final appearance was in episode 93 where he teamed up with both Peguila and Ghostron in one last assault against Redman. Even though all three monsters had the advantage against the alien hero thanks to their incredible teamwork, Redman never gave up and kept on fighting. After killing Peguila and Ghostron, Sasahiller was killed when he was thrown over the rocky cliff by the hero's Red Fall.

Figure of Sasahiller, by Bullmark. 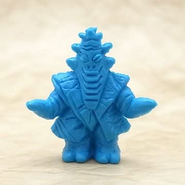 A Sasahiller eraser
Community content is available under CC-BY-SA unless otherwise noted.
Advertisement