TBA
Sartan (サータン Sātan) is a Kaiju that appeared in the TV series, Return of Ultraman. It first appeared in episode 19.

Sartan was an alien monster arriving on Earth in the form of a meteorite-like egg. A group of children including Jiro saw the object crash to Earth and investigated the crater, calling MAT to investigate and finding the meteor-like egg. MAT believed the object harmless and left it with them, but it began to flash and move on its own, breaking out of the container, quickly growing to giant size and hatching like an egg, Sartan emerged with the rubble killing a bunny and injuring Jiro. But before they could investigate, Sartan had already vanished.

Later that night, the now full grown creature flattened a car on the highway. As MAT investigated, Sartan tore through a building nearby, discovering the creature was invisible, only able to be seen through infrared vision and attacked the monster after finding its location. Sartan was forced to become visible and fight back, knocking two of them out before continuing its rampage until a MAT aircraft attacked. Sartan was only further angered by this and tried to escape by turning invisible but was quickly attacked again, forcing him out. Sartan used its invisibility to ambush the craft, knocking it out of the sky before vanishing again.

After Go feels remorse for not killing Sartan for Jiro, MAT comes with a plan to use atomic neutrons to corrupt the monster's neutrons which make it invisible. Then for the two MAT Arrows to intercept the beast. The next day this is put to use, the invisible Kaiju attacked the city once more, prompting MAT to attack it. Sartan showed himself to attack MAT but when attacked, quickly turned invisible again. MAT then used an electrified net to catch it, but it proved too strong and tore the net free, attacking the city again. Go soon became Ultraman Jack, only for the kaiju’s invisibility to be used against it, allowing it to come up behind him and strangle him with his trunk. Sartan was thrown over his shoulder to the ground but became invisible again, this time tackling Jack to the ground from behind. Jack then used the Ultra Bracelet, revealing Sartan’s location, after which he used two beams from his eyes to make Sartan visible again. The two leapt at each other, Jack knocking Sartan to the ground. Jack then used flips and kicks to spin Sartan around and make him dizzy before using Ultra Psychokinesis to lift him into the air were a beam of energy from the Ultra Bracelet blew Sartan to pieces, ending his rampage. The Giant Invisible Monster That Came from Space 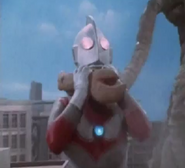 Sartan fist appeared in episode 35, where he teams up with Nokogilin and Bemstar to take on Redman and even though they held the team advantage against him, the hero never gave up and held his own against them. Eventually, Redman killed all of the monsters by throwing his Red Knife at them and made them collapse on each other.

In episode 36, while Redman was beating Beacon, Sartan showed up to fight him and eventually Beacon got back up to join forces with him and even though they had the advantage against Redman, the hero eventually defeated them with a judo throw onto their backs to the ground.

Sartan reappeared in episode 37, where he ran from Redman at first, but after the hero caught up to the monster with his Red Jump, Sartan got more cowardly, and despite his efforts, ended up getting beaten up by Redman. Even though the monster eventually decided to fight back, he was eventually killed by getting slashed by the Red Knife (with sparks and smoke following afterwards).

In episode 40, Sartan allied himself with Beacon but preferred to fight him alone, even though Beacon said so otherwise. After fighting themselves, Sartan began to fight Redman and eventually, after a while, Beacon decided to help him out. In the end Sartan got killed by a judo throw to the ground and Beacon fell soon afterwards.

Sartan reappeared in episode 41 where he once again teamed up with Beacon to fight Redman. After a long, evenly-matched fight, Redman held his own against the monsters and, after killing Beacon, even though Sartan managed to avoid getting killed by the killer's Red Knife, he was defeated by the Red Kick.

In episode 42, Sartan immediately fought Redman on top of a hill and descended down as the fight went on. When it looked as though Redman was going to lose, the hero quietly summoned his Red Knife and stabbed Sartan, resulting in his death.

Sartan reappears in episode 53 where he starts fighting Redman by knocking away his Red Knifes with his trunk and gaining the upper hand in close combat by dodging his attacks and using them against him but eventually the hero started to gain the upper hand. After being strangled by his trunk, Redman finally kills Sartan by striking him in the chest with his Red Arrow, then again in the leg, and finally tossing him off a cliff with his Red Throw.

Sartan's final appearance on the show was in episode 56, where he, at first, fought Redman alone, but when he was losing, Alien Mysteler and Arstron showed up to assist him. Even though they held the team advantage against him, the alien hero never gave up and took them on one at a time before killing them soon afterwards. After Arstron was killed, Sartan would seemingly follow up with a Red Kick to the neck. Before the good alien killed the evil one though, Sartan got back up but after Redman impaled Mysteler, he did the same thing to Sartan in the chest, killing him for good.

Sartan appeared as a background character in the the third issue of Redman comic, picking flowers and ignoring Kanegon. 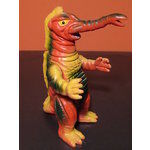 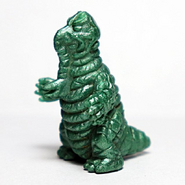 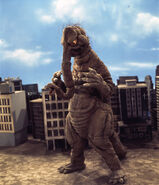 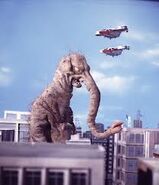