Saramandora[3] (サラマンドラ, Saramandora[3]) is a horned lizard-like Kaiju that serves the Alien Gorgon from the TV series, Ultraman 80. It first appeared in episode 13 of the series.

A tool of destruction used by the Alien Gorgon, Saramandora went on a rampage in Tokyo. Buildings crumbled into piles of debris as it assaulted everything in sight, and UGM's weapons were proving useless against the beast. Within the Silver Gull, Takeshi Yamato recklessly splits into two where Oyama was lured as a bait and Yamato took the opportunity to attack its throat, causing Saramandora to explode. Little did UGM know was that Saramandora was basically a bait that the Alien Gorgon operatives used to sneak into Japan undetected by slipping into one of its cells. The surviving cell was where the Gorgons emerged from and constantly carried around.

After their plan to frame Oyama failed and their presence exposed, the Gorgons were forced to combine with Saramandora's cell to reform the monster again. After it managed to counter the Formation Yamato trick, Ultraman 80 was forced into action to contend with the beast. The monster’s cannon blasts were no use against such a being, but when he switched to his flames, the giant put up a shield and fought back, eventually using the Succium Beam, but it did little against the creature. Surprised by this, Ultraman 80 used Ultra Eye Spot on Saramandora's unprotected throat and incinerated the monster to make sure that neither of its remains nor the Alien Gorgons could survive. Formation Yamato

Saramandora's history is never explained as he ambushes both Mirai and Serizawa (Ultraman Mebius and Hikari's human forms). Both quickly assumed their Ultra forms, with Mebius managing to toss Saramandora aside and used his Mebium Shoot to finish him quickly. However, Saramandora's armored-plated skin allowed him to shrug it off and then he beat Mebius to the ground, so Hikari fought the monster. Hikari had little to no trouble beating and tossing Saramandora around and then finished it off with a quick slash from his Knight Beam Blade, which seemingly destroyed Saramandora.

At first it seemed Saramandora was destroyed, but in fact was still alive due to regeneration. (Not every single cell was destroyed when Hikari "destroyed" him with his blade.) Saramandora later returned that day to resume his rampage. Team GUYS tried to take care of the monster themselves but were no match for Saramandora. Ultraman Hikari later returned and tried to take Saramandora by himself, but was beaten down by the monster. Once GUYS found Saramandora's weak spot under his chin they struck it, stunning Saramandora temporarily. With that opening, Ultraman Mebius returned to aid Hikari and together they both destroyed Saramandora completely by blasting him with the Mebium Shoot and the Knight Shoot together. Formation of Our Vow

Saramandora is partnered with the monsters Nova and Lunaticks and all three monsters were guarding a military base that had supplies that the ZAP SPACY needed for their ship. Rei sent Gomora as the ZAP SPACY retrieved the parts they needed. Gomora easily destroyed Nova, vaporizing him instantly with the Super Oscilatory Wave, but Saramandora and Lunaticks double-teamed Gomora and beat him down. Before the battle could progress much further, both Saramandora and Lunaticks were destroyed by the appearance of four black ships that would immediately reveal themselves to be a malfunction robot from Planet Pedan. Unexpected Reunion

Saramandora was partnered up with the monsters Dorako and Bemstar as their leader, Alien Shaplay ambushed the Ultra Brothers. However, they were met by surprise from Dan's capsule monsters Windom, Miclas, and Agira. Saramandora fought Windom.

Saramandora appeared in Ultraman Ginga as a Spark Doll. In episode 7, he along with many other Spark Dolls are seen cheering Ginga on as he fights Dark Galberos. It is likely that Saramandora returned to space in his original form after Ultraman Ginga defeated Dark Lugiel.

Saramandora appeared in the series as a Spark Doll along with King Crab, Sadola, and two others recovered by Xio from an unknown mission. My Friend's a Monster

In the final episode of Ultraman X, after Greeza destroyed the Xio base, Saramandora's Spark Doll was absorbed by Greeza. After speaking out to Gomora and striking Greeza right in the center of his chest, Saramandora, along with all of the other Spark Dolls, traveled to X and united with him. Saramandora's power was used to help form the Hybrid Armor and power up the Ultimate Xanadium to defeat Greeza once and for all. Saramandora, along with the numerous other Cyber Cards and Spark Dolls, then appeared and thanked Daichi as he thanked them. The Rainbow Land 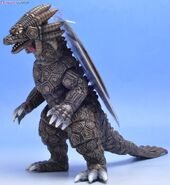 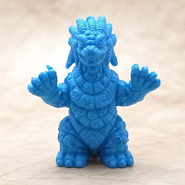