Sangelu was a very timid monster that landed on Earth with Alien Carpcis named June. One day Sangelu appeared out of nowhere, but appeared to be extremely scared as he could only shiver. Team EYES tried to tranquillise him, but failed. A while later, Musashi Haruno accidentally shot the alien, though not killed and enraged him more, but was too afraid to go pass the electrical towers. After the Alien revealed that earths atmosphere was damaging there ability to make shields, Sangelu would become enraged so the team helped and successfully made one, but the monster rammed into the electrical towers, lost his shield and started to attacked. Ultraman Cosmos appeared to stop the monster. He was shot many times by his fire balls and furiously kicked, but Cosmos then got the upper hand and soon used Full Moon Rect to calm him down and then used the Transformer Bubble to make another shield for Sangelu. Both Alien and monster thanked Cosmos and were soon rescued by more Alien Carpcis. 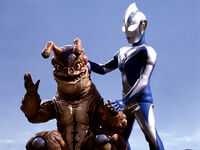 Add a photo to this gallery
Retrieved from "https://ultra.fandom.com/wiki/Sangelu?oldid=528940"
Community content is available under CC-BY-SA unless otherwise noted.