"The strong will destroy the weak, this is a universal rule!"

―Sandros while gloating over his strength.

https://www.youtube.com/watch?v=cIGgMQ1oaBY
Sandros (サンドロス Sandorosu) is an evil alien monster and the leader of the Scorpiss army, he is more powerful than any member of his army. He first appeared as the main antagonist in Ultraman Cosmos 2: The Blue Planet.

Long ago, Sandros, his race encountered the giant of legend: Justice, who had come to determine if his race would be a threat to galactic peace. Though they showed likeliness to be a threat, Justice allowed them to live. Two thousand years later Sandros attacked and ravaged several alien worlds, turning them into barren deserts to suit him, killing all who opposed him with his army of Scorpiss'. One of his attacks is on Planet Juran, where he kills Parastan, the planet's guardian itself. On the planet Gyas, Sandross drove the indegenious race to near extinction. When he learned of their intentions for an experiment to restore their world, Sandros sent his legion after them as they fled their world, however though most were killed a few where saved at the moment by Ultraman Justice.

Afterwards Sandros eventually tracked them to Earth, ending his their on a mission of destruction. The beast went to Earth when his vile minions failed him. Killing the last of the insect-like monsters himself, the fiend attacked Cosmos relentlessly. Blasting away at the defense ships and the hero, it seemed the guardian had finally met his match. But a new opponent intervened, Ultraman Justice had arrived and attacked the fiend from behind. As Sandros recovered, the other hero recharged Cosmos' energy, allowing him to fight to his fullest. Laughing aloud, Sandros began to unleash his black cloud. Unable to see the fiend, the two Ultramen were attacked by its energized blade repeatedly. Trying to keep track of the monster, the two finally saw their chance. It had foolishly stopped to charge up a fireball, exposing it in the darkness it had created. The two super beings each fired their beams, blasting the invader into oblivion. Sandros was mentioned as the reason behind Ultraman Justice joining the Gloker forces, as mankind was also predicted to be threat in two thousand years, just as Sandros was two thousands years hence.

Black Beam
Add a photo to this gallery

Ultra Monster Series Sandros
Add a photo to this gallery 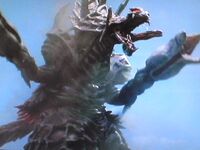 Add a photo to this gallery
Retrieved from "https://ultra.fandom.com/wiki/Sandros?oldid=536304"
Community content is available under CC-BY-SA unless otherwise noted.