Calibur is easily the least socially-accustomed out of the four Neon genesis Junior High Students, and even displays a lack of awareness to a certain degree regarding social cues and taboos as well as his own surroundings. Despite that, he cares deeply for the people he comes in contact with and does his best to protect them. He also seems to be rather lethargic, standing with a noticeable hunch and laying his chin on tables when he is sitting idly. However, out of the four he is also the one most interested in redeeming Anti while the others would easily resort to more aggressive interactions.

Samurai・Calibur, who initially had five swords, arrived in Tsutsujidai and saved Hime Kudzuki from a falling truck. His presence made her able to see monsters in the scenery. When a monster appears at a cafe, Calibur gives Hime one of his swords, which allows her to transform and fight using his power, the Samurai Barrier Gear. It becomes an app on her smartphone when not in use.

The next day, Hime and Calibur find a mysterious girl looking at them while discussing their duty and shared power. Having never seen her before, Hime chases her to an arcade, where another monster attacks. Hime and Samurai

Samurai・Calibur had been watching over Yuta Hibiki since he first appeared in public post-amnesia. He had also watched the school burn down after Ghoulghilas' attack. Awakening

The next day, he stops by at the Junk Shop to give Junk an optimization upgrade and then followed the Gridman Alliance to investigate the missing people. When Dévadadan attacks, and Gridman was losing, he used his Access Code to transform into the Gridman Calibur. Restoration

When Anti attacked, he interrupted Yuta and Sho at class, as well as picking up Rikka, to get them to Junk so Gridman can fight. When he was losing the battle, Calibur transformed into his Assist Weapon form to help Gridman but to no avail. He then stayed with Gridman while he recovered, waiting to ambush Anti when it comes back. However, his colleagues tell him to come out of Junk, so he complies while Gridman goes to fight Anti. Defeat He and the other Assist Weapons continue to fight alongside Gridman and Yuta. Calibur and Max fought against Anti, who was sent to kill Yuta and the two off them managed to chase him off afyer convincing him not to kill Yuta. Contact The next time he meets Anti, who stumbled into the Junk Shop looking for Rikka, Calibur gets his phone number. Confrontation Anti calls Calibur after Bujack's demise, demanding Gridman but Calibur states that Gridman doesn't need to come because Anti is a living being with a heart and there is no need to fight him. Dream Calibur had one more battle against Anti, and bested the boy. He then asked Anti what he would do after defeating Gridman; a question he had no amswer to. Calibur then left Anti to think about it. Collapse

After Junk and Gridman were restored, Full Powered Gridman lent the Gridman Calibur to Amti to fight against the Kaiju horde. The weapon changed its color and became the Gridknight Calibur. Decisive Battle

To awaken Gridman's true form, the Neon Genesis Junior High Students gained Acceptors and were integrated back into Gridman for the final battle. After that was over, he departed with Gridman back to the Hyper World. Awakening (Finale)

Jumbo Saber Slash
Gridknight Calibur
Gridman Calibur can alter its color to be utilized by Gridknight, who wields it in reverse-sword grip. 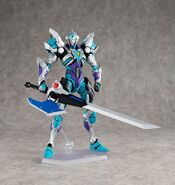 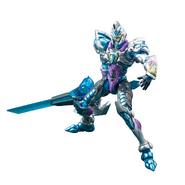