Samekujira (サメクジラ, Samekujiralit. Shark Whale)[1] is a shark Kaiju in Ultraman Taro. A creature native to the home planet of Alien Valky, a Samekujira was taken by the Space Fisherman to Earth as a part of his plan to show off his skill in catching it, then use the event as a springboard to take over the Earth afterwards. However, Taro destroyed Samekujira before Valky could carry out his plan, enraging the alien.

Samekijura was a creature sent to Earth by Alien Valky with the intention of 'capturing' the beast and then using this event to show off, with the whole plan being a mask for his true intentions to invade Planet Earth. A day after he attacked an oil tanker, Samekujira followed several ships to Honshu and rose out of the waters of Tokyo Bay. ZAT and Ultraman Taro soon came to the scene to stop the monster. During the battle, Alien Valky appeared and tried to stop Taro from fighting Samekujira, but the Ultra soon managed to chase off the Alien and destroyed Samekujira with his Strium Beam. Valky returned a short time later, furious that his catch had been killed by the Ultra. Farewell, Taro! The Mother of Ultra!

An infant Samekujira, named Samekichi, and his owner Alien Valky were sneakily entering an unknown blue planet. Later, it was put in the ocean by Valky as a reason to raise the baby aquatic monster. While the alien was caught off by Ultraman Joneus and Sora, the blue Ultra found and picked up Samekichi. Alien Valky explained the reason they were here was that Samekichi needed a spacious place to live due to its size growth. Ultraman Joneussuggested to used his Little Beam to make Samekichi stay in a small size for the rest of its life, as well as the Ultra People would take care of it.

A baby Samekujira reappeared in episode 9 of Ultraman X, "We are Nebula!" as Alien Valky Haruki's pet.

Named Jolly (ジョリー Jorī), it was Valky's pet back at his home planet and went to Earth after missing its master. However, its appearance attracted the Dark Star Cluster, who demanded the monster for their monster weapons until Valky challenged them to a rugby match. His team wins with the help of co-tent Isamu, saving Jolly from being sold.

A baby Samekujira reappeared in episode 5 of Ultraman Geed where he was seen lying in a box and found by Zenna and Moa Aizaki. Although how the Samekujira ended in the box (or to a lesser extent, Earth) is unknown, Zenna mentioned that said monster was originally kept as pets until they were abandoned due to their potential as monster weapons. What happened to it was unknown, although it was more likely to be taken care under AIB's custody.

A baby Samekujira was seen as one of the test subjects of Mabuze's experiments to create the ultimate creature. I Can't Hear Your Voice 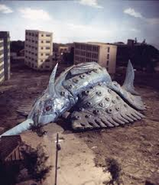 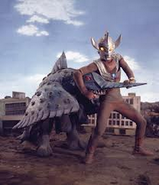 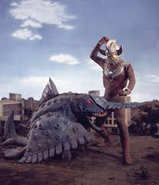 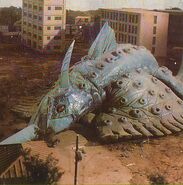 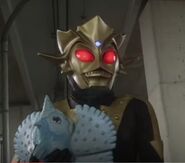 Samekujira and Alien Valky in an Ultra Zone sketch. 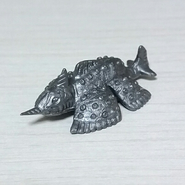