Salamadon was one of two monsters, along with Paragler, who was guarding Pigmon and the island's shrine. Salamadon was first seen threatening DASH until Pigmon arrived and calmed the monster down, informing him that DASH meant no harm. However once Pigmon was kidnapped by two thieves, Salamadon became violant and attacked the thieves' rescue helicopter, which disturbed the shrine, awakening the seal on the evil monster: Red King. With Red King unleashed, Salamadon was the only opposition to the monster and the two monsters fought. Unfortunately, Salamadon's strength was not enough to stop Red King and was ultimately killed by Red King's living explosive rock barrage. 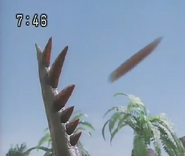 Spike Launch
Add a photo to this gallery 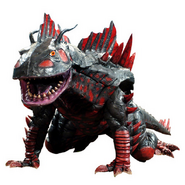 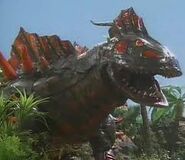 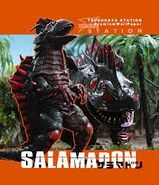 Red King vs Salamadon
Add a photo to this gallery
Retrieved from "https://ultra.fandom.com/wiki/Salamadon?oldid=391132"
Community content is available under CC-BY-SA unless otherwise noted.