Rina Koike
Sakuya (サクヤ, Sakuya) is one of the characters and Victorians in the series, Ultraman Ginga S. She is tasked with watching over the Victorian temple. She has known Sho since childhood and considers him a brother.

Sakuya and Repi always played together while watching over the Victorian temple, but instead, they used it to trick Victorian guards to see the outside world. Sakuya loved the way humans did things as well as their clothing. But she and Repi shouldn't have gone out, as they were reprimanded by Sho. They could get caught or get into trouble like when they took an apple from a store without paying.

As the events kept escalating, Sakuya and Repi appeared in the city to help evacuate people during Inpelaizer's raid. During the final confrontation, Sakuya and her fellow Victorians helped UPG to defend the citizens of the city from Dark Lugiel's Elite Forces, fighting along side Repi to take out two Chiburoids.

Thanks to her efforts in the counter attack against Vict Lugiel and his army, Sakuya was the first Victorian to join the UPG. When Etelgar and his brainwashed Arena invaded, Sakuya was on the front line with her fellow team mates, using her shock wave and Victorium Necklace to find a weakness in Arena.

Sakuya and Sho, now UPG members, went back underground on their day off and reunited with Repi. Suddenly, an antlion pit appeared after an earthquake and caused Sakuya to fall into it with Sho hot on her tail. As Sakuya watched as Sho, as Ultraman Victory dealt with Aribunta, Yapool snuck up behing her and swiped her Victorium Necklace as he planned to steal Victorium energies from the core.

After Sho defeated the Super Beast, with help from Ultraman Hikari and his new Knight Timbre, Hikari explained to them that the Space Emperor, Juda was reviving and that Yapool planned to use stolen the energies of the Victorium Core to revive him. Hikari also explained that he had invented the Knight Timbre to seal up the Emperor once and for all.

Later on, after Yapool, Juda and their forces were gone for good, Sho and Hikaru Raido returned to Earth with the Victorium Core's energies. Sho returned Sakuya's necklace to her and Sakuya thanked and hugged him for this, while Repi and Hikaru giggled on the side. Ultra Fight Victory 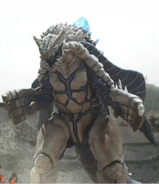