Saigo (サイゴ, Saigo) was a Kaiju from Ultraman.

An alien creature that inhabited Planet Q, Saigo was first seen in combat with Keylla. The two were battling as the SSSP arrived to watch. The battle seemed evenly matched, after Saigo blasted Keylla with his sand attack. However he was blinded by Keylla's blinding flashes and was sent into retreat.

Not long after, Saigo emerged from the ground as the Science Patrol got their vehicle stuck. The monster sought to destroy the invaders to its home, but the forces fought back hard, unloading everything they had at the beast. Saigo was covered in dry ice and its body shattered to pieces. 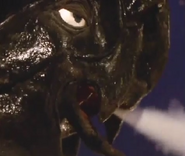 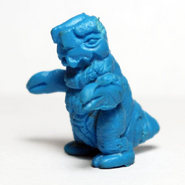