Sabotendar (サボテンダー Sabotenda)[1] is a Terrible-Monster that appeared in episode 12 of Ultraman Ace. It was created from the Terrible-Monster Creating Machine by combining a hedgehog and a cactus.

One of Yapool's Terrible-Monsters, Sabotendar was unleashed in a city where it smashed everything in site, even with TAC and Japan's SDF on the assult. Ultraman Ace was quick to arrive on the scene and both Ultra and Terrible-Monster battled. Ace's arm was briefly stabbed by the Terrible-Monster in the middle of battle, but backup for Ace came in the form of TAC, who teamed up with the Ultra to attack the Terrible-Monster. However, before it could be finished off, Sabotendar escaped by turning itself into a tiny cactus.

In its Cactus form, it was taken under refuge by an oblivious boy who used the cactus as a pet, feeding it bugs. Eventually, Sabotendar regained its health and resumed its attack on the city. Again, Ultraman Ace and TAC returned to engage Sabotendar in battle into a standstill. Despite revealing some new powers which included its tongue and its ball form, Ace fougth back and caught the cactus monster off guard, hurling it into the air while it was in its ball form and sliced it in half with the Ultra Guillotine, killing Sabotendar.

After Reconstructed Bemstar was starting to lose to Ultraman Taro, Yapool summoned weaker versions of his Terrible-Monster, Sabotendar and Verokron to help it. However, they were no match for Taro's might and ZAT's assaults. In the end, Sabotendar II was destroyed by Ultraman Taro's Strium Beam. 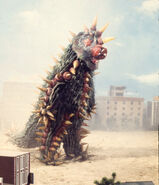 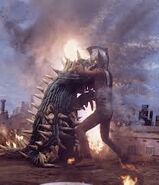 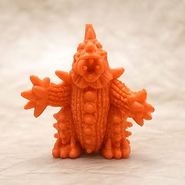