"You’re not alone. Whenever, forever."

(Guriddoman) is a 2018 anime series produced by Studio Trigger in collaboration with Tsuburaya Productions, based on the titular character of the series, Gridman the Hyper Agent and its American adaptation, Superhuman Samurai Syber-Squad. The series has also been licensed by Funimation, and is streamed in Fall 2018 with an English Dub via their streaming service, FunimationNow. It is also available for viewing on Crunchyroll, with English subtitles.

After SSSS.DYNAZENON was revealed, this series was designated as the first installment in the GRIDMAN UNIVERSE project.[5]

You're not alone. Whenever, forever.

Yuta Hibiki is a first-year student in high school living in Tsutsujidai. One day, he woke up without his memories.

Yuta later meets "Hyper Agent Gridman" who was inside an old computer.

Gridman told him to fulfill his purpose. Yuta's quest to understand the meaning behind those words and to find his memories began.

While all of this was sudden, Yuta had helpful assistance from his classmates, Sho Utsumi, Rikka Takarada, and Akane Shinjo, but...

Those peaceful days were destroyed mercilessly by a monster that suddenly appeared.[6]

As a follow up to each episode, an original voice drama is uploaded to Tsuburaya Productions' YouTube channel, for a duration of one week though from the eight episode and onward, they are uploaded to Pony Canyon's channel instead. They normally contain dialogue that foreshadows certain things in the next episode and the overall plot.

The popularity of the series has led to the development of a number of spin-offs. Among them are[10]: 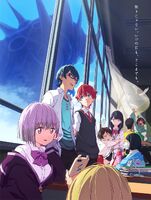 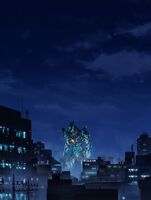