This may not be the article you are looking for. For the original counterpart, see SSSP (Science Special Search Party).

ULTRAMAN Chapter 1
The SSSP (Science Special Search Party) some forty years after the original series, much has changed but their overall goals remain the same, protect the world from alien threats.

The SSSP is now divided between an Extermination Division and an Investigative Division when it comes to dealing alien threats. Their main goal besides combating alien threats seems to be keeping knowledge of aliens on Earth secret from the general public. The SSSP's current method of operation now has more in common with organizations like TLT or DEUS than the original incarnation.

After the events of the original series, the SSSP officially disbanded however, the members of the original team, now knowing of Hayata's secret, that he was the host of Ultraman, sought to protect their amnesic friends from becoming a lab rat. Ide and the others worked to keep it open but secretly with Ide becoming the head of SSSP J branch. Though it stil worked out the same base, to the public it had been turned into the Giant of Light Memorial for Ultraman and the old SSSP. Years later Shin had a son Shinjiro, when Ide met the young boy he realized that he was not normal. He reveal to Shin that the Earth was still being targeted and that a new threat was looming. Showing him a video of the creature's evil deed, Ide awakened Shin's sealed memories of his time with Ultraman. Since then Shin wore the proto-type Ultraman Suit and fought the evil killing it. Between that time and the present, the SSSP managed to get the Earth inducted in the Universal Alliance, ending any threat of invasion or monster attacks but leaving Earth open for aliens to migrate to Earth. While most behaved as civil beings some rampaged and require either their extermination Division to act or their 'Ultraman' Shin. During this time their was a shift in Leader ship as the Alien Edo became the Head of SSSP J.

Edo: The self proclaimed last of the Zettonian Race after their failed invasion over forty years ago, Edo is first introduced after Shin and Shinjiro's battle with the resurrected Bemular, sitting next Ide beside Shinjiro's bed when he awoke from his battle injuries. The three later gather again after the boy checked on his comatose father and Edo explained his origins and the nature of the Alliance, which Earth's joining has solved some of it problems and created new one that require an 'Ultraman' as he put. With Shin getting old and now comatose for however long it takes to heal his injuries Edo asks Shinjiro to take his father's place as Earth's protector.
Mitsuhiro Ide: A veteran from the original SSSP Ide is old friends of the Hayatas, Shin's friend and an Uncle to Shinjiro. During Shinjiro's childhood Ide revealed to his father that he was Ultraman and that the Earth was again being threatened by invaders particularly one dark Ultra-like being that destroyed an airplane. Ide revealed to him that the SSSP was still active and he was it head, his goal was to protect Shin and his son from being lab rats as all of the original team hid Hayata's connected to the Giant of Light from their superiors.

After the time skip Ide is seen again in the carrier plane Shin throws his son, and explained to him his situation and the nature of his powers, Ide also presents Shin with his battle armor and later comments that his power exceeds his father's present abilities. After the battle the image of Ide running towards him is the last thing he sees before he faints and the image of Ide and Edo next to his bed is the first he sees when he wakes up. After taking the boy to see his father Ide takes him to see the Zettonian who explains to him the situation of the world, the SSSP, the alliance and his father's job as well as asking him to take over. While Shinjiro doesn't immediately agree Ide still acts as his mentor during his test run of the armor, ordering him to the sight of an accident to save a truck driver.

Another member of the original SSSP, Fuji appears as Morobohsi's superior, while he was having some manner of tests done on him. She reminded him that he was pushing himself too far. 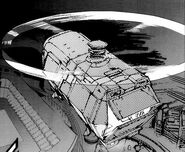