The (科学特捜隊 Saiensu Supesharu Sāchi Pāti, Kagaku Tokusō Tai), abbreviated as (Surī Esu Pī)[1], was a organization from the 1966 tokusatsu TV series Ultraman. An International Science Police Organization, it is officially named the Science Special Investigation Team (科学特別捜査隊 Kagaku Tokubetsu Sōsa-tai). Abbreviated as "The Science Patrol" (科特隊 Ka Toku-tai lit. Special Department Team), it is described (in the English-language version of episode 1) as being part of the "Scientific Investigation Agency," but what international organization this is an agency of is not specified. Its basic designations are to seek out bizarre anomalies, and in special cases, protect the public from kaiju attacks. The organization has a headquarters situated in Paris and has other major branches located in India, New York, the Middle East, and Bolivia that are mentioned in the series, but it also has connections in Brazil, London, Moscow, and Turkey. The organization's telephone number is 999.

The members that most often appear in Ultraman are the five members from the Japan branch, Captain Muramatsu (referred to as a Cap), followed by Chief Shin Hayata, Daisuke Arashi, Mitsuhiro Ide, and Personnel Officer Akiko Fuji. The young boy Isamu Hoshino was also made a Special Personnel Officer in the middle of the series, and the title of special personnel was also awarded to the friendly kaiju Pigmon (in episode 37). The Japanese branch has also been visited by members from the Paris headquarters and Overseas branches. (Instances of these are found in episodes 7, 22, 23, 31, and 32.) While originally depicted as having an emphasis on research rather than as a combat organization, the Science Patrol has managed to defeat many monsters on its own; indeed, the number of successes it has enjoyed is the highest of that of any defense team.

At the heart of the Japanese branch's establishment was Dr. Ichinotani and his colleagues, who appeared in Ultra Q. During the events of Tsuburaya Productions's certified PC game, Ultra Strategy, Mobilization of the Science Patrol!, which depicts the events between Ultraman and Ultra Q, the Science Patrol had been fighting against alien monsters long before the first appearance of the original Ultraman on Earth.

Initially, the founder, Dr. Ichinotani, was seriously injured when the nuclear dew monster Gold King attacked the Science Patrol's operations in the Hexagonal village ("Ultra Strategy" episode 1 "Birth of Japan's branch of the Science Patrol") and subsequently retired from front-line work. In episode 31 of Ultraman, Cap Muramatsu mentioned that the Japan branch of the SSSP had existed for at least 20 years by that time.[2]

Founded 20 years ago by Dr. Ichinotani from Ultra Q and located in the Tokyo suburbs, the SSSP Japanese branch HQ is formed by two interconnected buildings. The one is a gray-colored trapezoidal shaped building, while the other is a black building with a parallelogram shape. The launch pads of the Jet VTOLs are a separate construct next to the main building.

The outer walls of the base are built using a special ferrol alloy steel concrete, to block all light ray and heat ray attacks.

The internal of the base includes the command room which is equipped with a large electronic brain. The bedrooms are on the upper floor with a fire pole leading down to the command room. A hotel section exists with well-equipped sleeping rooms for visitors. An analysis room is used to study items recovered from field missions and to assemble equipment and new weapons. An automatic water discharge apparatus has also been installed all around the base, for the purpose of suppression of structure fires.[3]

The extraterrestrial department of the SSSP was testing sub-light speed technology. Their base of operations was on board Sub-light Spaceship Izanami. The ship has a docking bay that is able to store a Jet VTOL.

Toshio "Cap" Muramatsu ( Muramatsu Toshio) is the leader of the Science Patrol. He is very serious and is also highly intelligent. He is sometimes shown smoking a pipe. He is known as Captain Mura in the US version.

Shin Hayata ( Hayata Shin) is the Science Patrol's brave and no-nonsense chief. His life changed when Ultraman's Travel Sphere accidentally crashed with Hayata's Sub VTOL, destroying it, and killing Hayata. Ultraman, ashamed of what he did, decided to merge his life force with Hayata's, bringing the human back to life. Ultraman gave Hayata the Beta Capsule, which, when he presses the red button on its side, transforms him into Ultraman.

Ever since Ultraman, Hayata has been Ultraman's human host.

Daisuke Arashi ( Arashi Daisuke), the Science Patrol's resident sharp-shooter; his favorite weapon, a two-handed rifle called the Spider-Shot in the original, is called the Gamma-Ray Gun in the English version. He is shown to have a tough guy personality, but he is very caring towards his fellow teammates, and has a soft spot for children.

Mitsuhiro Ide ( Ide Mitsuhiro) is a scientist, and the primary ordnance-and-munitions inventor of the Science Patrol. Sometimes he feels his weapons are useless because of Ultraman; however, sometimes his weapons saved the day. He is rather comical by comparison with the team's other personnel, and is very skinny and tall. He is called Ito in the English-language version. In episode 30, it is stated that his mother died when he was a child.

Akiko Fuji ( Fuji Akiko) is the operator of communications of the Science Patrol, she is the only female on the Tokyo team. She is very intelligent, and can be presumed to have been born in June, as the pearl (as shown in "The Pearl Defense Directive") is her birthstone. In most adventures, Fuji proves to be the most level-headed and capable member after Hayata.

Isamu Hoshino ( Hoshino Isamu) is the Science Patrol's unofficial mascot, he gets to hang out with the full-fledged members; later, he is even issued a Science Patrol uniform after the encounter with Bullton. He often gets into trouble, and sometimes Ultraman would have to save him. He is known as Hoshino Fuji in the US version, which describes him as Akiko Fuji's younger brother.

He was the designer of the Jet VTOL, and simultaneously the Phoenix No. rocket. He took over for Dr. Ichinotani, from Ultra Q, as the Science Patrol's scientific adviser after the latter's retirement. (Appears in episodes 5, 12, 13, 16, 25, 36, 39)
Liaison Jim (ジム連絡員 Jimu renraku-in) was a SSSP member from their France HQ. He was sent to Japan HQ to help them investigate the Arabian Desert's mysterious plane disappearances (that were caused by Antlar). Jim knows many languages, including Arabic and Hebrew. He also knows of the ESP ability that the princess of Baraj uses. Actor: Edgar Keizer
Anne Morheim came from France HQ to show Hayata, Paris. Anne also had an underground twin, who took her place as an impostor and tried to corrupt Ultraman to the evil of the Underground People--but without success, as Shin Hayata's transformation instead killed them all. Anne then came back from Paris after realizing Hayata had been abducted and explained to the Science Patrol what had happened. Actor: Annette Sonfers
Alan Birottsu came from France HQ to help the Japan HQ with Jamila's force field. Alan then told the Science Patrol about Jamila. Actor: Pierre Pirottsu
Gotoh was a member of the Bolivian base of the Science Patrol. 20 years before the series he and his father where sent on a expedition to the Amazon only to have them both killed by Keronia. Keronia disguised himself as Gotoh and tried to infiltrate the SSSP base. The real Gotoh never actually appeared in the series; "his" only appearance was when Keronia was disguised as him. Actor: Yoio Kirino

Patty is from the SSSP's India branch. Hayata was her escort while she visited Japan. She became unconscious due to Zambolar's combustion.

She was called Patra in the English dub.

Shingo Sakomizu (サコミズ・シンゴ Sakomizu Shingo) was originally a member of the SSSP that was on an away mission from Earth during Ultraman as captain of Sub-light Spaceship Izanami. During one of these flights, he was attacked by a fleet of alien ships but was saved by Zoffy. This incident made him realize how much the Ultras were actually doing for humanity, that the human race was unaware of the hidden dangers in the Universe and his testimonies upon his return were the reason GUYS was formed and maintained despite a lack of supposed threats from aliens or monsters for twenty-five years.

Due to the Rip-Van-Winkle effect, Sakomizu had only experienced a fraction of the time experience on Earth. The result of approaching the Speed-of-Light is that time stretches and the time outside the object moving at such velocities is faster than inside. This is why he is so young despite being of Shin Hayata's generation.

The Science Patrol is equipped with numerous special equipment, so they can operate according to any situation. Development of equipment is done mainly in the science center, by Dr. Iwamoto and member Matsuhiro Ide.

The Patrol personnel wear international-orange field uniforms under a regular duty blue business suit uniform with white trousers or skirts. When the order to go into the field is given, the outer suit is designed to be quickly removed in favor of the field uniform. Accompanying the field uniform are special helmets with ear fixtures that improve the reception of their communicator pins, and visors that provide visual aid, such as when using weapons. The field uniform/helmet combination also provides a degree of protection, such as from radiation, even enough to allow a human to operate in space without having to breathe or worry about the bends.

The uniforms of the SSSP are noteworthy, as they were international orange in dominant color, and based on those used in the film Forbidden Planet in having a mantle that descends from each shoulder in front with a curved hem. However, they wear white shirts and orange four-in-hand ties instead of a ribbed imitation of a sailor's striped shirt. Their tie tacks are emergency detectors; each flashes and beeps when a monster is near. They wear plastic airman's helmets with the insignia in the middle, which also appears on both descending parts of the mantle. As a precursor to the later Star Trek's communicator being incorporated into the insignia, theirs functions as a two-way radio once a tiny antenna is raised from the star on the insignia on the left. 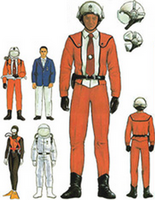 SSSP uniform
Add a photo to this gallery 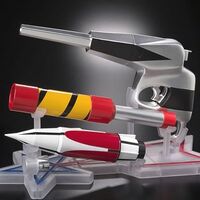 The SSSP operated many different vehicles, most of which are depicted by models. Their car was a customized 1961 rear engine air-cooled Corvair sedan, one of the smallest cars Chevrolet ever made. 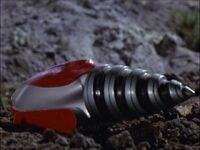 Science Patrol Car
Add a photo to this gallery

The manga version of the attack team from the 2011 manga from HEROES magazine. 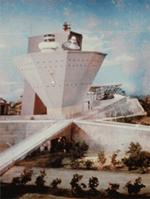 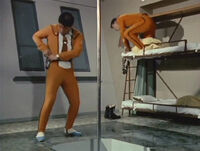 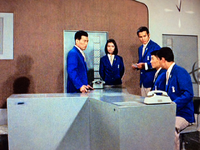 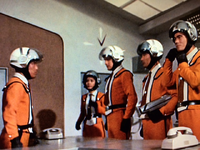 the Science Patrol with Liason Jim 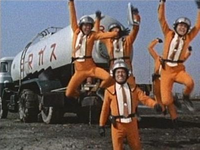 A still from "Present from the Sky,"
immediately after Skydon has
supposedly been dispatched.
In the English version,
the narrator says ominously,
just as this still appears on screen,
"But it was still too early to celebrate." 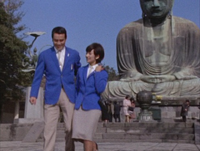 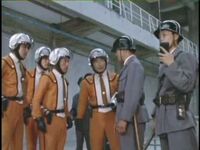 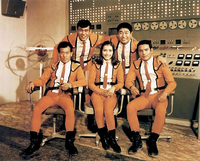 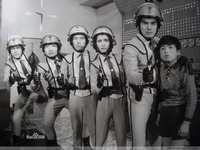 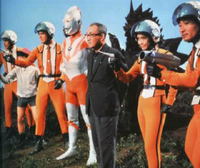 SSSP alongside Ultraman and Eiji Tsuburaya

Inner Workings of the SSSP HQ

Retrieved from "https://ultra.fandom.com/wiki/SSSP_(Science_Special_Search-Party)?oldid=512447"
Community content is available under CC-BY-SA unless otherwise noted.