Ultraman Cosmos vs. Ultraman Justice: The Final Battle
SRC (Scientific Research Circle) is an organization that aims to close the gap between mankind and nature. Their goals include rescue operations, paranormal investigations and the study and protection of monsters and aliens. At the time of Ultraman Cosmos: The First Contact they were a private institution, but after their credible actions during the Baltan invasion they were recognized by the UN and made a worldwide organization. They have branches all over the world and the organizations Team EYES and Team SEA are branch organizations. They and their sub-groups are often at odds with the National Emergency Corps Sharks on the treatment of monsters and interactions with aliens.

Originally the SRC with the members work as a normal civilians during the daylight. During the invasion of Alien Baltan Basical, this team along with an 8 year old Musashi Haruno tries to remove the threat by playing the Japan's national anthem. Though it was proven effective, but the SHARKS army fighter jet rapidly firing the monster itself causing him to gone wild. After Ultraman Cosmos defeats the enemy, the SHARKS General tried to destroy Cosmos along but Musashi and his father stopped him and sabotaged his plans.

Some years later, the SRC had made into two different branches, with Team SEA composed of the original members and EYES with new members. 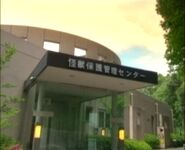 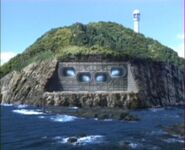 Treasure Base, where Team EYES is based

The original SRC members returned during the crisis of Sandros' invasion where they investigate a group of aliens with human lookalike under the sea with Musashi temporarily joining them.

Known as Jisan (Old Man), he is the officer in charge of the monster observation facility and is a close friend of Musashi's.
The head of the SRC medical center, has a calm personality and a family doctor type of relationship with Team EYES.

A famous playboy, Noboru has hit on almost every female staff member in the SRC Treasure Base and is hated by each of them. Prior to joining the SRC he worked in a clinic as a surgeon and can easily perform first aide in tough situations. In Cosmos, he was absent from Treasure base but returned in episode 25 where Shinobu is cold to him but their relationship improves by episode 35. He had lingering regret for leaving his practice to join SRC and is best friends with many of his patients. He is played by Kagemaru Shigeki who also played Shingo in Ultraman Tiga, a HEART member in Ultraman Neos, and Kaji in the Heisei Ultraseven series. He also played another military character in Bio Planet WoO, another Tsuburaya series.
A scientist around since the SRC's beginning, many of SRC's equipment were developed by her and her peers. A former lover of Captain Huira, they were once very close but their differing personalities caused them to break up, with her perfectionist attitude unable to cope with his opinion that her inventions were too perfect.

An old friend of Musashi from his boyhood days, he is a brilliant scientist who created Musashi's robot friend Clevergon and a respected voice of the SRC.

Noboru Akatsuki: The captain of the SRC team, coordinates the team with the National Emergency Corps Sharks during the Baltan crisis and divisor of tactic 'Act One', which was used to put the alien to sleep
Kido: The mechanic of the SRC, usually works at a car manufacturer, has a bright personality. Returned as the leader of Team SEA in The Blue Planet.
Watanabe Kyoko: One of the members in charge of the computers, she was the music teacher in Musashi's school where she wore glasses during the time of the first movie.
Riden: The strong man of the team, he was a wrestler, whose gimmick was that he was from the Edo Period and had superhuman strength by the stage name Raiden. He was working as a pastry chef at the time of the movies. His real name is Kaoru.
Ichinose: A full time member of the SRC and an astronomer, works mainly as back up and is a trained martial artist and heavy lifter.