Triple Fighter episode 26
SAT (サット Satto short for Space Attack Team) is a defense force in Triple Fighter. It was formed by the descendants of the aliens from planet M who were destroyed by the Alien Devil.

This organisation was formed in order to protect earth from the Alien Devil who planned to invade it. The headquarters of SAT is in Paris. The branch in Japan is operated by the three Hayase siblings, it is based in the basement of the Hayases' house.

Tetsuo Hayase (早瀬哲夫 Hayase Tetsuo) he eldest of the three siblings and the captain of the branch in Japan. He is very intelligent and has designed all of SAT's machines. Often addressed as Elder Brother Tetsu (哲兄（てつにい) Tetsu-Ni) by Yuji.

Yuji Hayase (早瀬勇二 Hayase Yuji) is second youngest of the Hayase siblings. He is strong but also reckless. Initially, he rides on the SAT bike but since Episode 10, he often drives the SAT buggy.

Yuri Hayase (早瀬ユリ Hayase Yuri)The youngest of the Hayase siblings. Yuri has a kind heart and is an excellent jumper. She is good at driving the SAT car.

A Robo-Computer created by Tetsuo. He always wait at the base, he was in charge of answering and decrypting in the headquarters. He will wag his tail-like parts when he is happy.

A private boy not related to the SAT, but for some reason is allowed to enter the SAT base. He is good friends with Bullkon.

In the past was the scientific personnel of the SAT Paris headquarters, after Alien Devil killed his sister, he took action against the Alien Devil alone in order to fulfil his revenge. 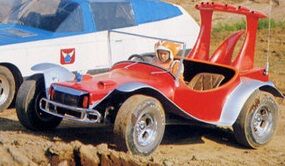